Jean-Claude Van Damme is a superstar of the martial arts world. So when former UFC bantamweight champion Cody Garbrandt got the opportunity to train with the Belgian legend, you’d think it would have been a dream come through.

As can be seen in a video that’s been making the viral rounds on the internet over the last few days, this was not the case. In fact, the pair were very close to coming to blows.

In the video, Garbrandt and Van Damme are going through sparring motions without making hard contact. When the 57-year-old Kickboxer star catches Garbrandt in the mouth with a hook kick, the younger man responds angrily and storms off.

The UFC fighter received significant online criticism for his reaction, with many fighters and fans believing he should have just kept his hands up. In an interview on the Mike Swick Podcast, Garbrant explained exactly why he was so furious.

Early in their session, it became clear that there were going to be differences. Garbrandt commented on how disgusted he was with the fact that Van Damme was sweating all over his training partners. He said:

“He’s just sweating all over the place and Chris Holdsworth’s in there with me. And he’s like showing the stretches on Chris and he’s sweating on Chris. Sweating on his face. Our buddy Rob is like ‘Jean’… he had this towel dangling on his front you know, and he kept using these towels and we’re throwing him towels. Wipe the sweat you’re dripping all over these guys. And I’m just sitting here like oh sh-t this is gross.”

From his comments, it’s clear that Garbrandt isn’t accusing Van Damme of not showing respect. On the contrary, it seems like the Belgian was oblivious to the issues he was creating in the gym. This made it difficult for Garbrandt to react in the way he would have with a younger opponent. 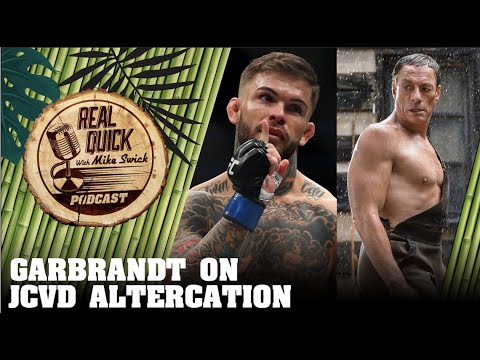 Garbrandt explained that he was infuriated by Van Damme’s approach and lack of control. He said that after the incident he explained to Robert Meese of Team Alpha Male why he wasn’t interested in continuing the training session with the film star. He said:

“Look Rob. I don’t want to talk to Jean. I don’t want to hang out with him. That was bulls-t. He was like “oh he didn’t mean it”. Dude that guy has kicked that kick thousands of times. He’s been in martial arts however long he’s been doing karate and sh-t. He knows how to pull a kick. He kicked me right in the teeth. I was so infuriated. I was so mad.”

Despite many commentators criticising his petulance towards Van Damme in the video, it turns out Garbrandt might have actually made the mature decision. He was infuriated by a clear lack of control on the part of Van Damme. As it wasn’t malicious and Van Damme being both older and internationally famous, he didn’t want to make the situation worse by reacting violently. 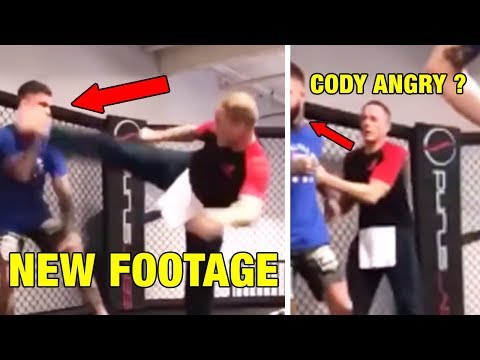 Despite the fact that he clearly still isn’t impressed by Van Damme’s lack of control, Garbrandt insists that it is all good now, saying:

“He is a great guy. Uriah had a catered dinner the next night. We came. We went me and my wife. I had my brothers in town actually. So we went and Jean came in and he was apologising and I was like whatever, it’s alright. But I was so mad when he almost kicked my teeth out.”

It’s fair to say that differences in training style made the situation more volatile. Van Damme brought Garbrandt out of his comfort zone with an extensive stretching routine. Hurting Chris Holdsworth by not showing proper control and sweating all over the gym clearly didn’t help matters.

The Team Alpha Male fighter made the point that Van Damme had a similar altercation with Mike Tyson. Maybe the old saying is true: never meet your hero.

Darren - May 13, 2018 0
UFC Fan Favorite Nick Diaz Has Sensationally Claimed That He Was Poisoned in the Build-Up to His 2013 Title Fight Against Georges St. Pierre...  Nick...

The REAL Reason Jones Wants Lesnar Not Miocic is Exactly What...