Colby Covington made headlines last week after he unleashed a stinging rebuke towards Nick Diaz who had just called out the new heavyweight champion Daniel Cormier. Diaz calling out DC would be like CM Punk fighting Demetrious Johnson. It just wouldn’t work. He’d get battered.

Anyway, the Diaz brothers were not very impressed by Covington’s less than polite analysis of the situation. Not that ‘Chaos’ is known to care very much. He’s literally built his brand and won a title shot off of being controversial. This is a man who spoils the endings of movies for fun. Evil.

But has he turned a corner? Fans are actually starting to think he has a point because where everyone else sucks up to the Diaz brothers, he’s honest about the fact that they’re in a whole world of legal trouble and haven’t fought for a combined 5 years between them.

“I think he’s too busy getting drunk and hitting women in clubs, he ain’t got enough time for fighting no more. He’s got bigger issues now, he’s got to deal with the law. All he’s been doing for the last couple of years is trying to generate hype, keep the hype up so he can get sponsors. He keeps saying he wants to fight but he’s out in Stockton acting like a little bitch.

I expect him and Nate to be a little hostile the next time I see them and probably try and get their hands on me. Put Nate and Nick with me in a room at the same time, there’s only man coming out and that’s me. Nick and Nate have no chance, I’ll beat both those scrubs up on the same night.”

‘Chaos’ also pointed out how ridiculous it is for Nick to even think that he has a chance of getting a fight with DC, nevermind beating him. This is a fighter who has spent the majority of his career at welterweight, moving up to middleweight in his last couple of match-ups. Covington said:

“He’s just delusional. He’s putting stuff out there that’s fake news. Come on bro, you’re not going up to heavyweight and beating the natty GOAT, Daniel Cormier, and he is the natural greatest of all time.

I had to put him in his place. I had to let him know: I’m the 170 title holder. If you come back and you want a big fight I’m waiting for you – that’s easy money, homie. They’re little nerds and they’re going to be a part of nerd bash soon. They’re going to be on the VIP guest list for nerd bash. No nerd is safe.” 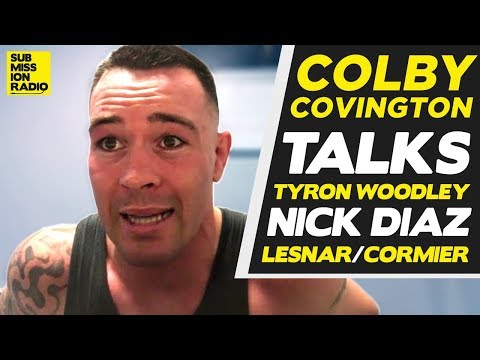 Ladies and Gentlemen – I don’t know about you, but there isn’t a fight at welterweight I’d be more excited by than Nick Diaz vs Colby Covington. Sorry, Tyron Woodley. First things first though. ‘Chaos’ has to beat the champion.

Ariel Helwani reported that the UFC was trying to strip Covington and replace him with Darren Till. However, this does not seem to be the case. There was a scheduling conflict, but it looks like they’re going to try to resolve it. It will be the toughest fight of Covington’s career, but if he wins, the prize will be bigger than just a belt.

Floyd Mayweather Facing Civil War as ANOTHER Fighter Walks Away

Darren - Jun 23, 2018 0
Former IBF Lightweight Champion Mickey Bey is Furious With Floyd Mayweather and Has Left His Camp... All is not well in Mayweather Promotions. The world's...

Seven UFC Fighters Who Were Champions In Other Sports

eSports: Brief History and Most Important Milestones of Competitive Gaming