The UFC has suffered from plummeting viewing figures over the last year. Many analysts believe that this is due to a combination of too many shows and a lack of star power to carry them. Right now, the only mainstream star they have is Conor McGregor and he cannot be relied upon.

Throughout the twenty-five years of the UFC, they’ve had their share of brand leaders. Chuck Liddel, Frank Shamrock, and Anderson Silva were all major draws in their prime. However, things really moved forward for the organization when Ronda Rousey and Conor McGregor came in and changed the game.

Unfortunately for fans, the UFC has a habit of looking back instead of looking forward. Case in point this week, when UFC President Dana White confirmed that WWE stalwart and former heavyweight champion Brock Lesner will be making his return to the cage later this year.

This absolute behemoth of a man won the heavyweight title back in 2008, defending it twice. However, he lost it to Cain Velasquez in 2010. He has made a recent comeback, facing Australian fan favorite Mark Hunt. After beating Hunt, Lesner failed a pair of drug tests.

Needless to say, Hunt wasn’t happy. He appealed the decision and the result was overturned to a No-Contest. Lesner was fined $250, 000 for his indiscretions and suspended for ten years by the Nevada State Athletic Commission. Then he retired again in 2017.

However, now that his WWE contract is coming to an end, it’s looking highly likely that Lesner will be back in MMA action. He’s expected to appear at WrestleMania 34 on Sunday. Incidentally, this is the same show where former UFC superstar Ronda Rousey will be making her professional wrestling debut.

When asked by a journalist if Lesner was going to make his return anytime soon, Dana White was positive and emphatic in his response. Speaking at the UFC 223 pre-fight press conference he told the media:

“Yeah, Brock Lesner is coming back. I don’t know when but he is.” 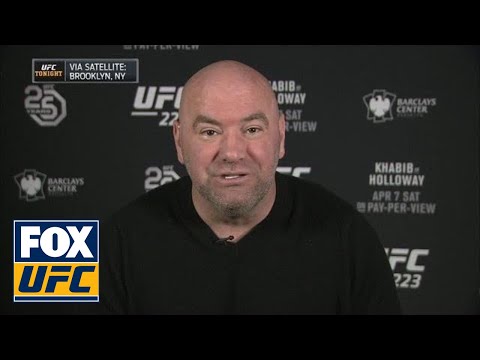 There are still a few obstacles to overturn. Lesner technically still has a six-month ban ahead of him because NSAC regulations mean that his suspension was frozen when he decided to retire. Unless a deal can be struck to strike the ban back over the period Lesner has been inactive, we’ll still have to wait six months for a 40-year-old to return.

Of course, the next question is who would he fight? Francis Ngannou has made no secret of his desire to take on Lesner, but UFC bosses could get done for murder if they book that one. Lesner against the winner of Stipe Miocic and Daniel Cormier? Crazier things have happened in this crazy sport we love.

Another star expected to make his comeback this year is Conor McGregor. The ‘Notorious’ is due to come back in late 2018 and is expected to face either Max Holloway or Khabib Nurmagamedov for the lightweight title. The UFC really needs new stars though. They really do.

Salvador Sanchez - Jun 22, 2017 0
Two of the best boxers on the planet discuss the popular/controversial Mayweather vs. McGregor... Although it's likely to be one of, if not the biggest...