At some point, Conor McGregor is going to have sit down and ask himself what is he doing. He’s a multi-millionaire – indeed the richest athlete in the history of MMA – with two kids, prospering businesses, and a decent professional fight record.

He also had the love of his nation, but now they regard him with apathy because all of that money has gone to his head. If you ask the average Irish person what they think of him, they’ll probably say “it’s a pity he doesn’t have the class of Katie Taylor.” Now he’s facing assault charges after video footage emerged of him punching an elderly gentleman in the head.

It was a suckerpunch that allegedly took place after the man rejected a shot of McGregor’s whiskey, in a pub in Dublin, Ireland. The investigation began in April when the alleged offence took place and is still on-going. 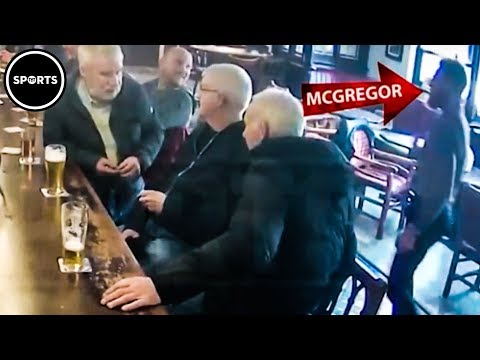 The Garda Siochana – Irish police force – have confirmed that an investigation is on-going, although no arrests have been made so far. A file has been sent to the Department of Public Prosecution. As you can see from the video the mature-looking gent took the punch well.

If you get convicted of assault causing harm in Ireland, you face either an unlimited fine or up to five years imprisonment. Even more worrying for McGregor is the difficulties he could face getting a visa for the United States. Although, maybe he’s not worried about that because he seems to be doing his best to try and stop himself from getting one.

Dana White is in full damage control mode. He has tried to downplay the event while simultaneously despairing that McGregor keeps getting himself involved in these types of situations. The UFC President ludicrously claimed that people are only talking about this because it’s McGregor. Well duh. He’s a celebrity. He’d still be a scumbag if it was just an ordinary Joe.

Well, you’d hope that even regular people can’t go around sucker-punching guys in the head.

When asked about the incident, former UFC lightweight champion Anthony Pettis took McGregor’s side. He said that the old guy must have said something to really annoy McGregor. ‘Showtime’ is fighting one of McGregor’s two biggest rivals this weekend in Nate Diaz.

“It was crazy, but who knows what that dude said?” Pettis told MMA Junkie at UFC 241 media day. “I’m sure something was said for him to do that. He’s not going to punch somebody in the face for no reason.”

Even if the guy did say something really awful, at the end of the day he’s an old man sitting in a bar. McGregor is a millionaire athlete living his best life. Just smile at him and walk away. He’s got nothing on you. Surely it can’t be that difficult?

Gentleman Jeff - Oct 25, 2016 0
A fight between Miesha Tate and Cristiane "Cyborg" Justino could be in the works, but judging by what Cyborg posted on social media recently, it...

How Important Is It to Have Good Number Instagram Followers for...

Conor McGregor is Ready to Beat Cowboy in Sparring Match

How Popular Box Outside The GamStop Is