There is less than three weeks to go until “The Notorious” Conor McGregor steps inside the Octagon against UFC lightweight champion Eddie Alvarez.

A new video showing a sneak peak into the life of the famous Irishman has been released by The Mac Life.

McGregor is attempting to become the first ever to hold two UFC world title belts simultaneously in different weight divisions.

He is currently the reigning UFC featherweight champion. If he can defeat Alvarez, he will have both the featherweight and lightweight belts to put over his shoulders.

Only a select few like Randy Couture and BJ Penn have won two UFC titles in different divisions, but no one has yet to hold two at the same time.

He would have challenged then champion Rafael dos Anjos for the lightweight belt. But due to a sudden injury, dos Anjos would be unavailable and Nate Diaz filled in as a replacement.

McGregor lost to Diaz but defeated him in an immediate rematch months later. Now, McGregor is picking up where he left off with Alvarez.

Before joining the UFC four years ago, McGregor previously accomplished the feat of being a two-division champion with his previous promotion. It is an accomplishment he had always aspired to replicate when he joined the UFC in 2013.

While Alvarez poses a new challenge for McGregor with his wrestling, the Irishman is hard at work preparing for one of the biggest nights of his career.

In the video, The Mac Life follows McGregor at the gym. It shows various clips of him in training. McGregor then proceeds to go around the city, to the barbershop and then to get some sushi.

On November 12, the UFC will hold its first ever show at Madison Square Garden in New York. With McGregor headlining the card, the event is projected to do record numbers.

However, if McGregor is successful against Alvarez, UFC President Dana White says he will have to give up either the featherweight or the lightweight belt as he is not allowed to hold two belts simultaneously. 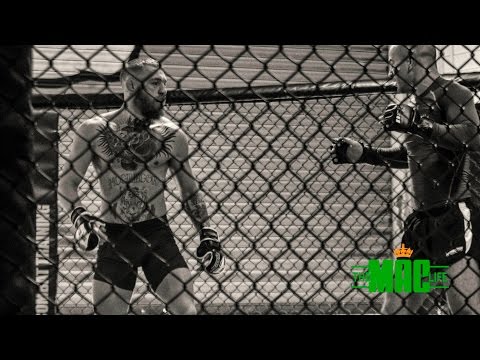 Atilano Diaz - Apr 25, 2017 0
Generally, martial artists are respectful of opponents inside the cage. They step onto the battlefield to showcase their skills, take care of business and...

Nate Diaz Trolls Conor McGregor, Wait Until You See This

Derrick Lewis Trolls Ronda Rousey After Knocking Her Boyfriend Out

QUOTE: Khabib & McGregor Will Get Knocked Out By Tony Ferguson