At yesterday’s stop on the Mayweather McGregor world tour, Floyd brought out a new trick to try and silence McGregor. Borrowing a page from the 1980s cartoon of the same name, Floyd beckoned “Voltron, Form!” in what was apparently his team’s cue to surround Conor.

The scuffle was quickly averted, although for a second things looked potentially explosive. Conor took some time to address the situation during his mic time today.

Although some of have criticized him for using racially charged language on the tour, Conor didn’t back away from dropping the term “juice head monkey” in reference to those in Floyd’s entourage.

After the first stop on the tour, some accused Conor of using insults with racial undertones. It is not clear however, if Conor intended, or was even aware, that some of his insults could be considered racist.

He addressed these concerns on the 3rd stop of the tour, where he simply informed all of his critics that he is, in fact, half-black himself:

A lot of media seem to be saying I’m against black people. That’s absolutely f*^#ing ridiculous. Do they not know I’m half black? I’m half black from the belly button down.

Just to show that that’s squashed, here’s a little present for my beautiful black female fans.

Conor’s gift to those fans was to just start thrusting his hips in the air, as he felt they would like this. 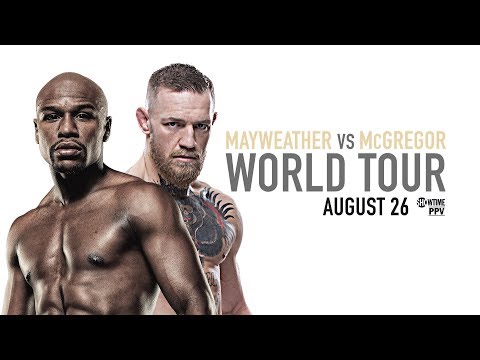 Today Conor didn’t shy away from hurling similar insults, though this time they were addressed to Floyd’s entourage.

“Quadruple My Net Worth For Half a Fight”

Today is Conor McGregor’s birthday. He turned 29. He started off today’s press conference by saying 4 years ago he was fighting in front of 500 people. Now, he said, he stands to “quadruple his net worth” all for a “half a fight”.

Conor elaborated on what he means by “half a fight”:

Referring to a boxing match as “half a fight” and challenging Floyd to get in the octagon will also make good narratives for Conor if the bout goes as many predict it will.

Floyd went back to calling Conor a quitter, just as he has for the entirety of the tour. Now referring to him as “Mr. Tapout” and “Mr. Quitter”.

Another theme that Conor went back to was telling Floyd to act his age:

May, you’re 40! Get that fookin phone out of your hand like a fookin kid! A 40 year old man, what the fook?

Conor also went back to alleging that Floyd was wearing lifts in his shoes to appear taller:

He was wearing high heels yesterday! Check the face-off picture from yesterday and check it from the day before. Proper fookin high heels that b*^ch was wearing!

Conor, as mentioned above, also took the time to address Floyd’s entourage swarming him yesterday:

What the fook was that yesterday?

(Mayweather) shouts Voltron! Power rangers! And these fooking juice heads come walking up standing before me.

Conor then turned his attention to 2 particular members of Floyd’s entourage. He referred to them as juice heads a couple of time, but the last time he addressed them he added “monkey” to his insult:

WATCH: Two of Conor McGregor’s Teammates Get Knocked Out Cold

Solar Panels in India: Pricing, Warranties, and the best type

Sleeping Referee Has To Be Told Fighter is KO’d