Well this just got interesting…

Many will remember Julian Wallace for his part in one of the most viewed viral MMA videos ever. Labelled as the ‘MMA Bully,’ Wallace became notorious for attempting to intimidate Ben Nguyen during the weigh-ins before their fight.

After getting knocked out in round one, the video went insanely viral. Unfortunately ‘The Jackal’ would later become known for some far more unsavoury reasons. During a highly controversial incident last year, Wallace went on the run from authorities in Australia.

After she reportedly brought him the wrong noodles for dinner, Wallace ‘choked and soccer kicked’ his girlfriend Jessy Jess. Fellow MMA fighter Jess was able to fight him off, before calling authorities.

Wallace would later plead guilty to the charges in court, but the Australian authorities granted him bail without travel restrictions. Just a few months later, and Wallace has surfaced stateside, announcing that he’s been picked up by Jackson-Winklejohn in New Mexico:

Although the charges against him still stand, it’s unclear whether Wallace will now ever have to face them. Another concerning matter is the restraining order his now-ex-girlfriend has against Wallace.

Having been issued in Australia, and now with both living in America, the ‘AVO’ might not hold weight as it did down under. Would the UFC hire Wallace to fight in their bantamweight division?

At this stage, with Wallace coming off a loss, he’d likely have to put some work in first. Training out of Jackson’s could help improve ‘The Jackal’s’ current form,but only if he stays out of trouble will he get a call from the big shows, perhaps Bellator?

Also training out of Jackson-Wink is former light-heavyweight champion Jon Jones, who will attempt yet another comeback from controversy this year. Daniel Cormier waits, the belt still his, for a rematch that’s been two years in the making.

Here’s a video of Wallace getting KTFO at Team Alpha Male: 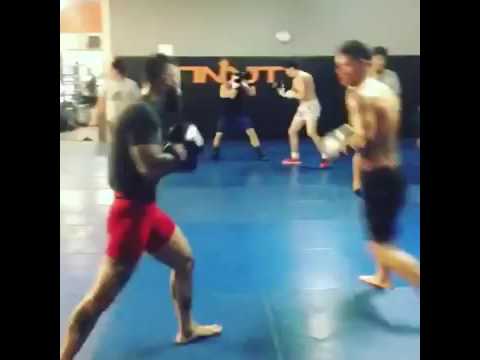 Top Nine Most Offensive UFC Memes Of All Time

Salvador Sanchez - Oct 14, 2016 0
Memes are often used at the expense of another person or entity, but in the UFC it seems to be quite a bit more...

WATCH: Mark Hunt Gets Brutally Submitted in the First Round