Furthermore, he ran a martial arts academy in Terenure, County Dublin which taught ITF taekwondo. However, he’s set to spend the next few years of his life in prison after killing a man. He got into an argument with 56-year-old Patrick Mullaly who died as a result of the incident. It was a dumb drunken brawl that ended in tragic circumstances.

Dargan threw a punch that sent Mullaly crashing to the ground where he hit his head off the curb. He suffered a brain hemorrhage and passed away the following day. The incident took place back in 2016. The Dubliner is also a long-serving doorman at the famous Lillie’s Bordello nightclub. 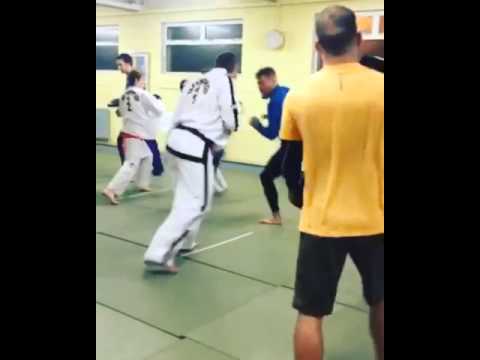 Mullaly and his friend Shane Cunningham were out celebrating the former’s retirement from the Guinness Factory. Then they passed Dargan who was in an intense argument with his girlfriend. They tried to intervene when Dargan erupted and threw punches at the pair, shouting ‘bang, bang.’ After the incident he told the Irish Times:

“I’m so sorry. It was an accident. I’m devastated and heartbroken for that man and his family. All I can say is I’m crushed… If I could take back everything that happened that night I would, but all I can do is beg his family for their forgiveness. It was a genuine mistake.”

In the clip above you can see Dargan in a Taekwondo dobok teaching Conor McGregor a back kick. Dargan had a significant influence on SBG’s striking program. Unsurprisingly SBG didn’t want that bad press so stepped away from the prominent gym. John Kavanagh once said:

“It’s great having Johnny around… He’s a hero to all the guys. He won’t mind me saying that he’s on the slightly wrong side of 40 but he still gets in and does all the sessions with the guys. He can push anyone in the gym and he is still the fastest man that I’ve ever seen.”

Dargan went 1-3 as an MMA fighter after taking the sport up in his 40s. Incredibly BAMMA even booked him to fight since the arrest. However, his opponent was unable to compete.

The victim’s sister spoke about the judge’s decision. Dargan will serve at least five-and-a-half years of a six-year sentence for manslaughter. It’s one of the most common tragic stories out there. Streetfights happens and a man hits his head and dies. It’s a sad state of affairs. Mary Mullaly told the Irish Times:

“We’ll be forever grateful… Four years later, we’re still absolutely devastated by the loss of our beloved Paddy. His life revolved around being a devoted dad, caring brother, fun uncle and a cherished friend. We as a family miss him every day but there is also a huge group of friends who are grieving alongside us. No matter what happened today, sadly we’re left with a life sentence.”