He may have turned down a fight with TJ Dillashaw earlier this year, but Demetrious Johnson believes he can take on all challengers. He recently made a somewhat bold claim about how he would fair when pitted up against a much larger fighter.

We don’t get to see size discrepancies amongst fighters as often as we used to. Although some promotions do keep the practice alive. The pioneering days of modern mixed martial arts featured plenty such bouts, however. The art of a smaller fighter defeating a much larger opponent is sadly getting lost in the modern era.

Earlier this year Demetrious Johnson turned down a fight with TJ Dillashaw. He gave the following reasons for doing so:

“It’s just the principle of a bantamweight coming down and skipping the line,” Johnson said.

There is a precedent for former champions from other divisions skipping the line. Frankie Edgar and BJ Penn have both done so. The other issue at play, however, was that this was for Mighty Mouse’s record-breaking title defense. There were some who felt he was attempting to take the easy way out. One of those people was Dana White:

Dana was incensed that Demetrious turned down the fight, though the flyweight champion’s bout with Ray Borg received near universal praise, even from White himself.

Throughout Johson’s title reign, there have been frequent calls for him to jump back up to bantamweight to take on then-champion, Dominick Cruz.

Johnson always ended up deciding against the jump back to bantamweight, however.

There was a point in time and I even went up to Matt (Hume) and was like ‘Matt, I think I’m ready to do it, I’m ready to go fight at 135, I want people at the edge of their seats like oh (expletive) the champ’s going to go fight at 135’. But he goes ‘there’s bigger things to do DJ’. He said if you can go out there and beat Anderson Silva’s record, that’s big. That’s what my goal is, and that’s where my heart is right now,” Johnson said.

Despite his concerns about going up to 135lbs, Johnson feels confident he’d do pretty good against the 265lbs and under club.

Check out Demetrious giving his account of how he would finish Lesnar if they were ever to fight: 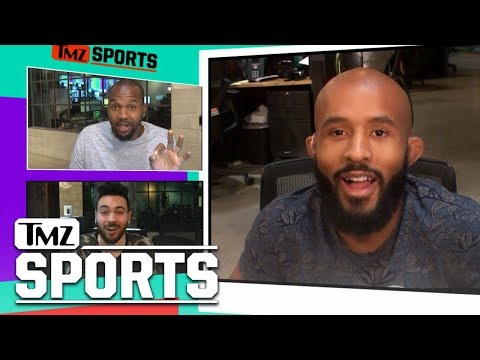 Francis Ngannou will have Kamaru Usman in his corner for the...

John - Mar 18, 2021 0
Francis Ngannou seems to work on his wrestling and what better way to have his African brother, the current welterweight champion Kamaru Usman. In...

Joe Rogan’s Reaction To Ronda Rousey Getting KTFO Is Priceless

Colby Covington Explains Why He is the ‘Supervillain’ of the UFC

Jon Jones is Ready to Move to the WWE