Michael Chandler will have a shot at the vacant UFC lightweight strap at just his second UFC fight.. He and Charles Oliveira will be fighting for the vacant belt and will be the main-event for UFC 262.

You could argue that he was given a great offer by the UFC of becoming a back-up fighter of Khabib vs Gaethje fight had one of them missed weight or pull out the fight and that is a fighter who has not fought in the UFC even once.

Many would argue that he does not deserve to fight for the title mainly because he needs to work his way up like other contenders. Chandler made one of the best UFC debuts by knocking out top ranked Dan Hooker in the very first round. Hooker is known for his durability and to get stopped shows how hard Chandler hits.

Outside of the UFC, he was a well accomplished martial artist. He was a former Bellator Champion, beating guys like Eddie Alvarez, Ben Henderson, fighters that were once a UFC champion. That just shows Chandler also belongs in the UFC roster. 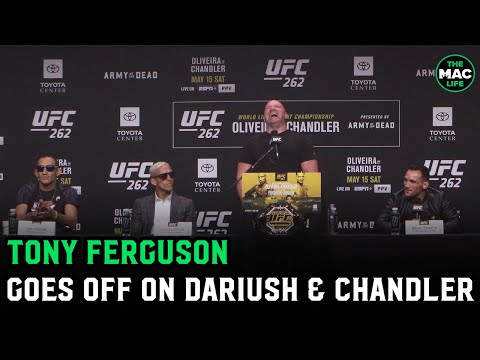 Chandler was just at the right place at the right time, with Poirier deciding to get the McGregor payday. The UFC had no choice but to find another top contender that is coming off a win and that is highly ranked. Michael Chandler is that person.

Darren - Feb 21, 2019 0
It's All Over... 'Rush' Has Finally Announced His Official Retirement After a Legendary Career... Arguably the Greatest Fighter in the History of the UFC,...

Tony Ferguson Explains Why Conor McGregor is Terrified of Him