Like a real Asian superhero, the original ‘one punch man’ Cung Le has enjoyed a spectacular career. From his wins over Patrick Cote and Frank Shamrock, Le built himself a solid reputation. When he stepped inside the Octagon against Rich Franklin in 2012 however, Le was billed as the underdog. And rightfully so.

Franklin is and forever will be a legend in the sport of MMA. For Le to be able to face Franklin at UFC on Fuel TV 6 was a treat for all MMA fans.

By all means, Franklin was the favorite going into this matchup. The American MMA legend from Cincinnati sports a 29-7 pro record. He had faced the biggest names in the sport entering the bout with Cung Le.

Franklin had wins over Wanderlei Silva, Chuck Liddell, Yushin Okami, Ken Shamrock and Nate Quarry. Out of his 29 wins, 25 of them came by finish. That includes 10 submissions and a whopping 15 knockouts. Impressive? You betcha.

Although on the heels of retirement, Franklin took on Le with a handful of fights left on his UFC contract. He was supposed to use the Le bout to evaluate where he was at in that stage of his career.

Le entered the bout with no expectations, just gratitude that he would be able to fight a legend. He had prepared long and hard for the fight. What happened next, Le would have never been able to foresee.

Skip to 0:46 in the video for the crazy knockout… 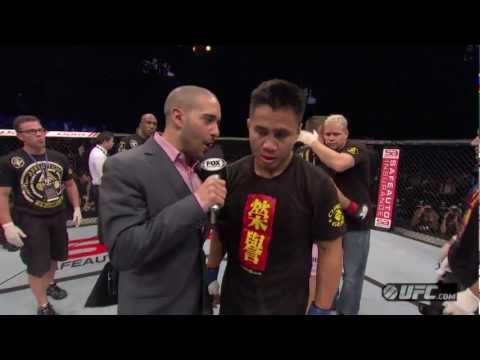 ‘It Was a Lucky Punch’

The Asian-American star needed just a little over two minutes to end the bout in emphatic fashion. A single punch was all it took to down one of MMA’s all-time greats.

After Le caught a low kick by Franklin, he uncorked a wild looping right hook that landed on the button. It was quick and precise and all that was needed to end the night early.

Franklin was out on his feet.

After the punch had landed, it was clear Franklin was completely out. The American slumped to the canvas face first, eyes glazed over. Referee Marc Goddard wasted no time to call a halt to the contest.

“That was the biggest fight of my life,” said Le. “Thank you Rich Franklin for the opportunity. I’m grateful. I don’t know what to say, it was a lucky punch.”

It was Franklin’s last appearance inside the Octagon.

Mike Tyson Once Knocked Out Wesley Snipes Over a Woman…

Darren - Sep 7, 2018 0
'Iron' Mike And Wesley Snipes Once Had a Massive Fallout Over a Woman... The Two Men Fought Out Their Differences on the Street... But...

10 UFC Stars Who Came Agonizingly Close To Becoming A Champion

WATCH: Rival Gangs Fight Each Other During Wild Boxing Event

Georges St. Pierre Reveals Why He Really Left The UFC