This kind of thing is a familiar scene at martial arts gyms. It seems there is always some guy who thinks he’s all tough. But the moment they step into the ring with someone who actually knows what they’re doing, they get taught a lesson.

In a viral video making the rounds online, one dude finds out the hard way. You don’t talk smack in a gym if you can’t back it up.

The two men in this short clip touch gloves before the sparring starts. The first punch the guy in the red shirt throws lands clean.

There Is No ‘Fair’ In A Real Fight

The man in the yellow shorts was obviously stunned from the impact. But red shirt guy continues the onslaught.

What happens next is one of the most thorough beatdowns ever seen inside the gym. Red shirt guy just tees off, landing a series of haymakers on his hapless opponent.

As the guy in the yellow shorts hangs onto the ropes for dear life, red shirt guy continues to pound him with shot until he’s had enough. He lands a kick to the body for good measure and the beatdown ends.

After the chaos is complete, red shirt guy proceeds to tell his opponent off. Chances are, there must have been some sort of disagreement for that kind of beatdown to be warranted.

Those who have seen the video are torn. Observers feel that what red shirt guy did was excessive and unnecessary, literally punching a guy who was obviously not defending himself. 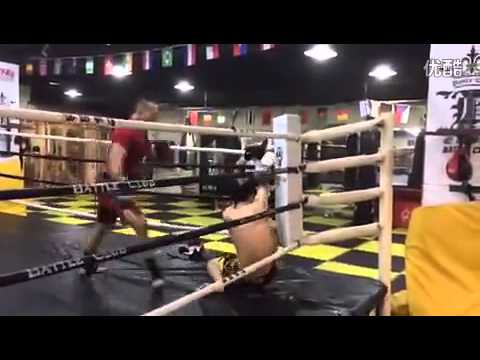 Some Lessons Are Taught With Fists

On the other hand, some feel the punishment was warranted because both guys agreed to tango, despite the disparity in skill.

Regardless, anytime someone steps into the ring to throw down, it takes real cojones. Props to whoever has the intestinal fortitude to purposely get into a fight.

Being in a real fight, there’s no right or wrong. The only rule is to defend yourself at all times — a lesson the guy in the yellow shorts would have learned by now.

Salvador Sanchez - May 21, 2017 1
The countdown began last week, but apparently it will get even crazier... Nearly two years after the talk started, we find ourselves on the brink...