Conor McGregor and Khabib Nurmagamedov are set to fight in the main event of UFC 229 in the most anticipated MMA fight of all time. The pair has a toxic rivalry, that reached its peak when McGregor threw a dolly at a media bus carrying the Russian fighter.

The two men’s camps have been hyping up their respective fighters and talking about their different skill sets. Khabib is the current UFC lightweight champion and is one of the most feared pressure wrestlers on the planet. His Combat Sambo style has seen him achieve a ludicrous 26-0 unbeaten record.

However, McGregor possesses one of the most vicious left-hands in the game. The Irishman’s coach Owen Roddy believes that his student’s power and stand-up skills will be the difference when they finally meet in the octagon, on October 6, in Las Vegas’s T-Mobile Arena.

Roddy spoke on the Ariel Helwani MMA Show. He was emphatic about McGregor’s developed skills. Some people have speculated that his 2017 could cost him because he spent so much time practicing his boxing for the Floyd Mayweather fight. However, in contrast to Khabib’s coaches, he said they have a tailored plan for the Russian. He said:

“He’s in good shape. He’s always training and always improving. He never stops training. The Conor McGregor you’re going to see on October 6 is definitely going to be twice the fighter he was in previous fights. Most definitely.

He’s in good nick, and at the moment now we’re just starting to tailor a game plan and put a game plan specific to Khabib together. Now it’s time to really fine-tune the game plan, and fine-tune what we expect from Khabib and create some solutions.”

McGregor’s striking coach unsurprisingly believes that the Notorious will knock out Nurmagamedov. He insists that Khabib has never fought a striker like McGregor. He told Helwani:

“Khabib’s definitely never fought a striker like Conor McGregor. And if all those other opponents can land shots on him, most definitely Conor can land on him. And 99% of the time, Conor sleeps people when he lands on them.”

“I definitely think Conor’s going to land on him. Most definitely. And it’s just whether or not he’s going to be standing after those shots. And I always say, I’ve said it in every single fight, either you’re asleep or it’s only a matter of time before he lands again and then you’re asleep.” 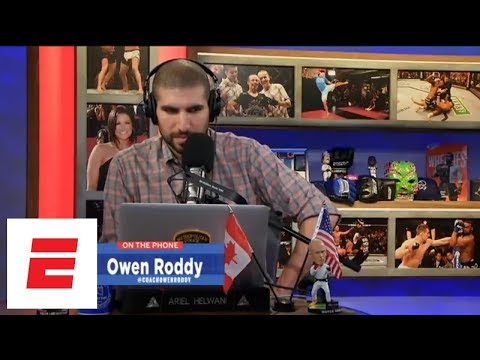 It’s going to be absolutely fascinating. We’ve got two very distinct styles that could destroy the other. McGregor is a lethal counter-striker, while Nurmagamedov is a devastating pressure wrestler. We know that Khabib will have to push forward to take McGregor down. Will he be caught by the Notorious and knocked out?

The other possibility is that McGregor DOES get taken down and absolutely brutalized for a couple of rounds, before eventually getting submitted. How much has McGregor learned from his win against Chad Mendes?