Most people agree that Conor McGregor’s best weight class is the lightweight division. Sure, he was starching fighters left, right and centre at 145lbs, but the toll it took on his body was ridiculous. He literally looked like a meth addict when he made the vicious cut down to featherweight.

Nor was he as effective at welterweight. McGregor has fast-twitch muscle fibres that cause him to be incredibly explosive. However, this also limits his gas tank. His style is the opposite of somebody like Nick Diaz who favours output over trying to get the knockout punch.

Arguably McGregor’s most complete and dominant victory was his title fight win over Eddie Alvarez. However, Khabib Nurmagamedov put a beating on him on his lightweight return. But why is he choosing to fight Donald Cerrone at welterweight, when they’re both ranked 155lbers? 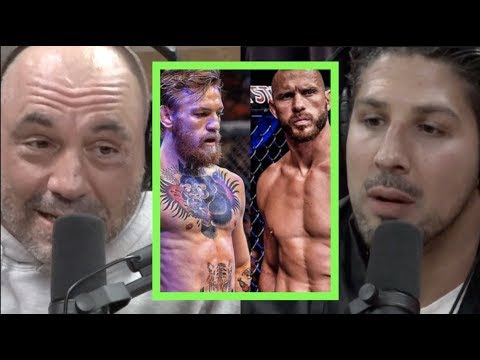 In short, Joe Rogan believes McGregor just doesn’t want to cut weight unless he has to. At 170lbs, he can literally eat carbs to pack on the mass to perform effectively. The Irishman hasn’t fought in 2019 but he’ll be looking to bounce back with a win early next year against Cerrone.

Because Conor doesn’t want to lose any weight,” Rogan said on a recent episode of his podcast. “I think that guy tortured himself to get down to 145 so hard – and when you look at what he looked like when he was on the scale, when he was flexing, he looked like a god damn zombie. It was horrible. So I think, whether he complains or not about that, nobody rides for free. You do that to your body for a couple of years, you do some damage and it makes it harder to lose the weight afterwards.

It could also be a question of who McGregor is trying to avoid. First of all, Khabib Nurmagamedov has effectively chased him down the division. If he stays at lightweight then it’s difficult for him to justify not fighting Justin Gaethje. Nobody wants that after a year of punching old men in bars.

Cerrone is a tough fight for anybody and it is a massive risk to take it in a heavier weight class. ‘Cowboy’ will have a weight and height advantage over the Irishman. We’ve seen McGregor struggle to knock out Nate Diaz at welterweight. Meanwhile, Rogan still believes it will be a great fight. He said:

“So then he’s going up to 155. He’s obviously elite at 155, wins the title at 155, has the great rematch with Diaz at 170 and then comes back and fights Khabib at 155 and gets mauled. He has a fight with Cowboy, he’s really a 55er that can fight welterweight. That’s the right size for him versus, I don’t think Nate is fighting 155 any time in the future anymore.”

There could be another reason why McGregor is fighting at welterweight. Diaz has basically made that his home now and there’s still the possibility of a trilogy fight. Perhaps more enticing is a potential clash with Jorge Masvidal. Many believe that ‘The Notorious’ doesn’t want that fire, but who knows? Dana White said:

“Conor has told me he definitely wants a fight with Masvidal. So we’ll see what happens.”

Who do you think would win that fight?

Scrapdigest - Mar 24, 2021 0
Whether you are just getting started in boxing betting or you are an experienced bettor in sports betting in general, some tricks and tips...