Georges St. Pierre discussed his future the other day in an illuminating interview on the MMA Hour. The 36-year-old Montreal native made his UFC comeback after a four-year hiatus. He fought and defeated Michael Bisping at UFC 217, where he became the middleweight champion of the world.

However, it hasn’t been plain sailing for ‘Rush’. He’s been battling with ulcerative colitis, a rehabilitating condition that affected his ability to cut weight for the Bisping fight. It’s worth pointing that although St. Pierre defeated Bisping, he didn’t look particularly convincing doing it. St. Pierre vacated the title soon after winning it, citing that he didn’t want to hold up the division while recovering from his illness.

Most people agree that middleweight is too heavy a division for St. Pierre anyway. If he does return to the octagon again it’s more likely to be at lightweight or welterweight. As a former welterweight champion, he defended his title an incredible 12 times, before retiring for the first time in 2013. Now on the MMA Hour, he has discussed who makes sense as a potential future opponent.

One man that it won’t be is Nate Diaz. Although the Stockton California native has announced his own intentions to return to the octagon, St. Pierre said that Diaz offers nothing for him from a legacy perspective.

“The fight with Nate Diaz doesn’t really interest me because I beat Nick Diaz,” St-Pierre said. “And logically, it’s not a risk worth taking for me, because if I beat Nate Diaz, it’s like normal for me. You know what I mean? It’s like, people expect me to win. But if I lose, I lose a big part of my legacy, I lose my name. I think it’s not worth it for me. Logically, it’s not worth it.”

Tyron Woodley is another name mentioned by St. Pierre. The American is the current UFC welterweight champion and has made no secret of his desire for a big money fight. St. Pierre signaled his respect for Woodley, but also his skepticism about the benefits of such a fight. ‘Rush’ said:

“If I fight against a guy who fights at 170… Tyron is a great champion, but I feel like he fought ‘Wonderboy,’ he won the fight, but his last fights were not fights that made history. He won the fights, it was great, but it feels like it was not like a special fight.”

St. Pierre name-dropped another welterweight fighter, Ben Askren. The American is a former ONE FC champion and is widely regarded to be the best fighter never to fight in the UFC, alongside Fedor Emelianenko. Recently retired, he’s signaled his interest in returning against St. Pierre, but ‘Rush’ says that he just is not well-known enough. 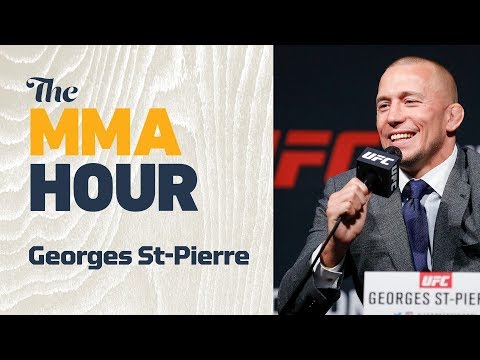 Of course, the biggest money fight possible, and a name that has been linked to St. Pierre before is Conor McGregor. The ‘Notorious’ is a natural lightweight but has fought at welterweight twice. He’s making his own plans for a comeback sometime this year, so it could just work out nicely for both men. But don’t put bets on it yet. St. Pierre said:

“I mean, money-wise, for people who are not huge fans of MMA, they know who Conor McGregor is. He’s the main guy. He’s the guy who brought the sport to a different level. He’s, I would say, the most charismatic guy. He sells, the biggest seller in the sport. But talk about legacy. If I come back for legacy, that’s what interests me the most, more than the money. Money, yes, it’s good, but if I come back, it would be more for a legacy match.”

There are a few options out there for one of the UFC’s greatest ever fighters. If he comes back at all that is. As he is getting older and recovering from ulcerative colitis, it’s by no means a certainty. Who would you like to see him fight?

Tyson Fury is not UNDERESTIMATING Wilder

What Happens When you Work too much?

How did Fury get up from the R12 Knockdown?

Should the UFC grant McGregor the trilogy against Poirier

Why is Conor McGregor Fighting at Welterweight?