Probably the most accomplished combat athlete we have ever seen, Henry “Triple C” Cejudo is without a doubt a generational talent. Although his UFC run was cut short after climbing to the top, he still beat the top guys across two divisions.

Cejudo was already a talented fighter even before his UFC run, he was already a well-accomplished wrestler and even won a gold medal in the Olympics. It just shows that his credential even without his MMA career, he was already one of the best combat athletes

.Initially, Cejudo tried to transition to boxing before choosing MMA since the money was bigger in boxing but eventually stuck with MMA as he can use his best weapon which is wrestling.

Obviously, they are all fighting to put food on the table, and back then Boxing superstars made bigger banks compared to MMA fighters since the sport has been there for so long thus making it more popular for the casual viewers.

Henry Cejudo initially had the nickname “The Messenger” and made his debut back in 2014. He was booked against Dustin Kimura at a UFC Fox Fight Night. Cejudo went on to beat Kimura via unanimous decision.UFC Youtube channel also uploaded his debut fight which can be watched below: 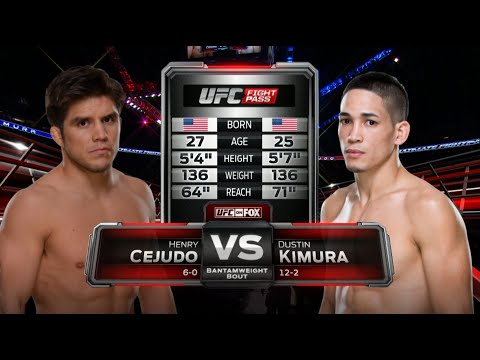 He then went on to beat Chris Cariaso, Chico Camus, and Jussier Formiga in just less than 12 months. All ended via unanimous decision. In just his 5th UFC fight, UFC decided to book him against Flyweight champion Demetrious Johnson who was already considered a top pound-for-pound fighter at that time.

Many thought that Cejudo was not ready to fight for the title since he could not even finish his past opponents and he was coming off a split decision win. In their defense, the top contenders of the flyweight were all run through by Johnson, so pretty much had run out opponents.

The fight ended early as Demetrious Johnson landed a knee to the body of Cejudo that sapped the wind out of Cejudo. Johnson went on to finish in under one round. Cejudo was then set to coach the Ultimate Fighter against Joseph Benavidez. It was a fun rivalry where it even involved a bit of drama. In the fight, Benavidez won via split decision but maybe it was due to Cejudo’s deducted point since he landed repeated low blows.

The loss made Cejudo climb the rankings once more, he then faced Wilson Reis to which he finished via punches. This was also the fight that Cejudo decided to change his fighting stance to a more Karate-oriented. It certainly made Cejudo a much better striker, where he manages the distance more.

At UFC 218, Cejudo faced Sergio Pettis and dominated the fight pretty much all three rounds. It was the start that Cejudo might be just getting better and is looking to be a threat if he fights for the title again.

The UFC granted Cejudo another title shot against Demetrious Johnson. Even though Cejudo was coming off two straight wins, he was still coming in as the heavy underdog. Cejudo was a +400 on the night of the fight.

In the fight, Cejudo suffered major adversity in the early parts as his nerves were not functioning well. It felt like his feet were not moving the way he wants them to move. Fortunately, as the round went on, he managed to recover from it.

The fight was close, Cejudo managed to take Johnson down and their striking was close. It could have been anyone’s fight. When Bruce Buffer announced the results, two judges gave it to Cejudo making him the new flyweight champion. It was a massive upset, although controversial to some, Cejudo showed huge improvements compared to their first encounter.

Usually, Johnson deserved to have an immediate rematch since he dominated the division for so long and also had a win over Cejudo but due to being traded to ONE FC for Ben Askren, the trilogy did not happen.

TJ Dillashaw was given a shot to move down and become a two-division champion. As Dillashaw said, he is sent to destroy the division for good if he beats Cejudo. The fight ended in just 32 seconds, Cejudo landed a punch just behind the ear of Dillashaw that disrupted the balance of Dillashaw. Cejudo went on to finish Dillashaw by landing consecutive punches. It was also an upset win for Cejudo.

It was later revealed that Dillashaw used a banned substance in their fight that suspended Dillashaw for 2 years. It meant that there will be a vacant belt at the bantamweight to which Cejudo had his eyes on.

Marlon Moraes was the #1 Bantamweight at that time so the UFC booked him and Cejudo to fight for the vacant belt. Cejudo was also the underdog coming to the fight as many believed that Moraes was just a knockout machine that could turn anyone’s light out.

In the first round, Cejudo couldn’t close the distance and had no answers with the leg kicks of Moraes. Eventually, as the rounds go on, Cejudo decided to fight dirty boxing and locked Muay Thai clinch that gassed Moraes out. Cejudo went on to finish a tired Moraes in the third round making him a two-division champion.

He then proclaimed that his nickname will be changed to “Triple C” as he was an Olympic Champion, Flyweight, and Bantamweight champion.

After winning the bantamweight, he decided to vacate his flyweight belt. Jose Aldo was also looking to move down to bantamweight and his first opponent was Moraes. Although the fight was close, many thought Aldo won but two judges gave it to Aldo.

Aldo somehow took Cejudo’s interest saying that he is willing to defend his belt against Aldo despite coming off a loss. Then the pandemic happened, the fight was not able to happen due to the country’s lockdown, so Dominick Cruz stepped in.

Cruz is considered by some as the greatest bantamweight due to his title defenses, he was known for his footwork as well. Cejudo had a smart game plan to chop the legs in order to neutralize the mobility as the rounds go on, which later led to a knee that knocked Cruz down. The knockdown led to a barrage of punches and the referee stopped the fight.

Cejudo later announced his retirement saying that he has accomplished a lot and thanked the UFC for the opportunity. A few months later, he called out Alexander Volkanovski for a super fight, and also a win could make him “C4” since it would mean another division belt. The UFC did not grant it and ignored the request for now.

Cejudo also stated that it is the only fight that could make him come back. Should the UFC book it right now since Holloway already has a fight booked against Yair Rodriguez and Volkanovski might want to stay active.

Salvador Sanchez - Nov 16, 2017 0
They say you never know who you are messing with. In this case, the guy may have been receiving a pension, but he could...