After succumbing to the powerful left hand of Conor McGregor at UFC 194, Jose Aldo had to deal with his first ever UFC loss. Until that point ‘Scarface’ was the only featherweight champion in the promotion’s history.

When the time came for his heavily requested rematch with McGregor, the Irishman was unavailable. Fighting twice against Nate Diaz and once with Eddie Alvarez meant ‘The Notorious’ was absent from 145 pounds.

Realising he would likely never get a rematch against Conor McGregor, Aldo became disillusioned. Already upset with the Reebok deal and other issues like fighter pay, the Brazilian asked for a release from his contract.

After defeating Frankie Edgar for the junior belt, Aldo was adamant that it was McGregor or bust. Leading up to UFC 206, the situation changed, and ‘Scarface’ was promoted to full champion again.

Yesterday was the one-year anniversary of McGregor’s KO against Jose Aldo. The UFC celebrated the moment by again releasing footage of ‘The Notorious’ putting Aldo to sleep. Now that Max Holloway owns the interim belt, a UFC 208 unification bout is the next step for Aldo.

Even with that huge fight on the horizon, talk of McGregor is still never far away. Currently the lightweight champion since being stripped of the featherweight belt, McGregor is clearly still a sore point for Aldo.

Check out what the Brazilian told MMAFighting.com during this week’s media scrum:

“I don’t know why Holloway was talking all that trash. He knew he’d be fighting me on February 11 in Brooklyn, so why is he asking ‘where’s Aldo?’ I see him as a normal fighter.” 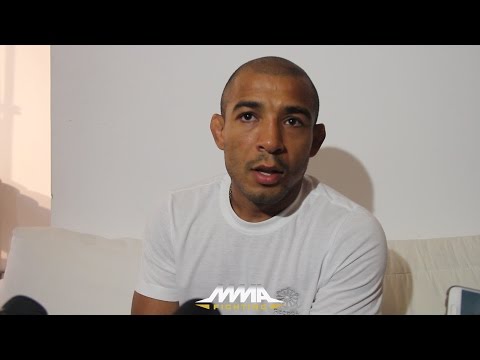