Ever since hype of a possible cross-sport superfight between Floyd Mayweather and Conor McGregor first came to light, barbs have come from each of their camps. McGregor has appeared numerous times in the media calling Mayweather out. Mayweather has largely done the same.

Recently, FightHype.com published a video of Mayweather in Miami, calling out the Irish UFC champion. Mayweather says that he will “slap Conor McGregor” when he sees him. This is just the latest in a string of recent barbs in the media between the two fighters.

Mayweather Could Fight McGregor In A Superfight

Mayweather is of course boxing’s biggest star and widely considered one of the greatest boxers to ever do it. He has a pristine 49-0 professional boxing record. Although he retired in 2015, many believe the itch to go for 50-0 is too strong.

It also doesn’t help that Mayweather is guaranteed at least $20-million each time he fights.

In contrast, McGregor is the highest earning UFC fighter in history.

Nearly every fan and observer who has followed combat sports knows that a Mayweather-McGregor superfight would be epic. It would shatter pretty much every financial record there is in sports and in pay-per-view.

Since defeating Andre Berto in 2015 in his supposed final bout, Mayweather has been living it up. He is also seen in the video in a Hawaiian shirt, lounging in a private estate in Miami while eating beans and rice. 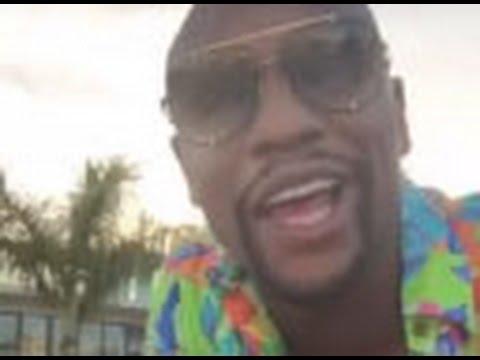 Previously, he has posted photos and videos of his lavish lifestyle on social media.

McGregor’s success stems from the Mayweather blueprint and the Irishman’s self-marketing style largely resembles that of Mayweather’s. McGregor has also not been shy about flashing the cash while the cameras are rolling.

Although UFC President Dana White says a bout between Mayweather and McGregor will never happen, many feel that it is inevitable. The money would be too great of a factor to dismiss.