Conor McGregor is one of the best MMA fighters on the planet. Before you laugh at us, he did beat Jose Aldo, Chad Mendes and Eddie Alvarez. The man has skills and he’s also crazy. So unless you’re also a highly trained MMA fighter, it’s probably not a good idea to tangle with him.

However, that message hasn’t reached Logan Paul. The Youtube sensation (for some reason) thinks that because he fought his fellow online star KSI to a draw, that an MMA fight with McGregor will go well for him. We don’t know why he thinks this.

If you’re so inclined, you can watch this moron talk rubbish for a couple of minutes. It’s your life, but we take no liability for the seconds you’re wasting. We just want you to laugh at him for being a fool. 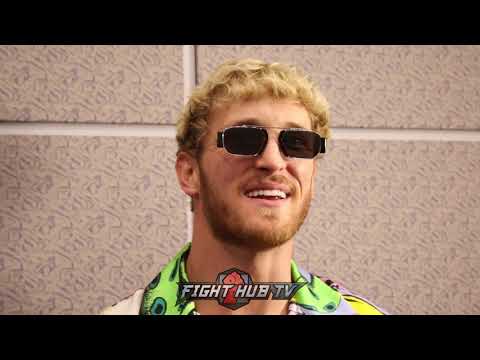 McGregor has already made headlines after a cryptic tweet he posted online. He appeared to reveal the date of his next fight on December 14th, in Dublin. We’re not going to question it. When asked what he thought about the Irishman, Logan Paul was emphatic.

“Me. I swear to God,” he told Fight Hub TV. Yeah, I’ll fight Conor. He’s f***ing punching old men in the face. He did take it [the punch] though! He took the punch and then just drank his whiskey. Those Irishmen dude, those Irishmen. Wild. No offence to Eddie [Hearn], I’m an MMA fan. I want to do MMA after this. I wrestled in high school.”

If he wrestled, we recommend throwing him in against Khabib Nurmagamedov. Give him a title shot straight away. There is probably nothing as therapeutic as watching ‘The Eagle’ brutalise the Paul brothers.

We fully endorse locking this moron in a cage with a man as wild as McGregor. Sure, money might have softened the former champion, but he remains as volatile as ever. He probably would appreciate Paul’s attempts at making headlines though. It’s the sort of thing ‘The Notorious’ does so well too.

In reality, Paul is set to ‘box’ KSI again in the United States. The young pair were praised by former UFC heavyweight Brendan Schaub for promoting their first fight so effectively on Youtube. Of course, it’s all a money-making scheme for the pair. We refuse to provide any more information about this. Go Google it if you care.

Realistically, if McGregor does fight, it won’t be against some moronic Youtube star. It’s going to be one of Justin Gaethje or Khabib Nurmagamedov, with the former the most likely of the two. ‘The Highlight’ has just won his 6th Performance of the Night bonus after beating Donald Cerrone.

Cerrone was also linked to a fight with McGregor, but that’s over now after back-to-back losses. Gaethje is the perfect fight for McGregor. The American is an entertainer and definitely a draw. He’s also very hittable, which is something ‘The Notorious’ would definitely enjoy.

Salvador Sanchez - May 6, 2016 0
If you are going to post about Brazilian Jiu Jitsu, this is one thing you need to get right... UFC featherweight champion Conor McGregor isn't...