Ever hear a true story that is so unbelievable that you might think it was just made up. Well, one story in mind is Bisping’s MMA career. Bisping started his UFC career in the Ultimate Fighter Series. He ended up winning the tournament.

Bisping is known as probably the biggest name in British MMA. No other British MMA fighter has better resume than Bisping, so he was their hope of becoming the first ever British Champion.

What is crazy is that Bisping was not known for being athletic, speed or even fight IQ. Bisping’s greatest strength is his heart and endurance. When both fighters are in deep water, you might bet Bisping is willing to die to get the win.

Usually in a fight, if a fighter has his eye shut, the doctor or referee would stop the fight. Well that was Bisping’s career through out, he fought with only one eye. In his fight with Belfort, his eye got damaged that led to it being blind. Usually if that is the case, fighter should retire for the sake of his future health but not Bisping.

In his fight with Cung Le, he showed promises and it was one of his most impressive wins but then lost to Luke Rockhold. He then went on to climb the rankings once more and went on a three fight win streak beating guys like Dolloway, Leites, and Anderson Silva respectively.

A once in a lifetime opportunity then arrived on Bisping’s front door, he was offered to fight Rockhold on short notice. He obviously accepted it, which is INSANE considering he is fighting a fighter that he once lost to and on a short notice. Many were expecting Bisping to lose, but he landed the left hook that knocked Rockhold out. It was one of the biggest upsets in UFC.

Winning the UFC belt was the only thing that Bisping lacked and he eventually got it. It was a Cinderella story and Bisping deserved it for his hardwork and perseverance. He may not be considered the best fighter of all time, but he has one of the biggest heart in MMA.

In his retirement, Bisping showed that how his right eye works. (NSFW) 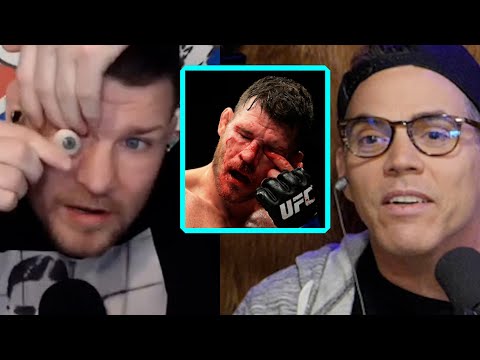 If you think about it, how did he even win a belt with just one eye. The only reason he retired was because in his fight with Kelvin Gastelum, he felt that his good eye was bothering him which is not worth the risk since he only has one good eye left.

Daniel Cormier Unloads On Jon Jones For Calling Him Dirty

Leon Edwards is OUT of his fight against Khamzat Chimaev