Yep, you read it correctly, two midgets will put on the superfight the fans really deserve…

Reading into the upcoming Floyd Mayweather vs. Conor McGregor boxing match can lead you to some confusing conclusions. For starters, consider why these guys are even fighting at all.

A retired boxer, arguably one of the greatest ever, facing a mixed martial artist in a boxing ring. McGregor, completely unseasoned in the boxing ring, but undoubtedly the biggest draw in combat sports today. Sound like a match made in heaven?

From a monetary point of view, yes, this fight will seriously line some pockets, but what about the little guy(s)?

Out in the Las Vegas strip, the night before Mayweather and McGregor collide, there’s a rumbling of a much smaller fight, quite literally. Being billed as ‘the biggest fight of the century,’ mini-Mayweather vs. mini-McGregor takes place on August 25.

Here’s the video of that historic bout that fans waited years to see: 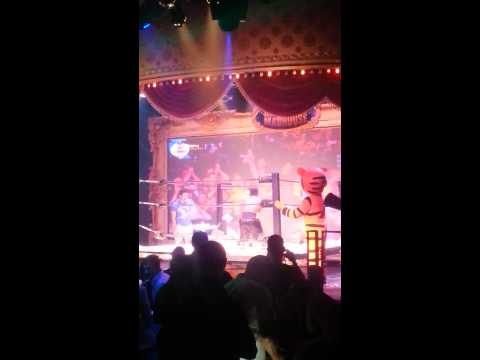 Mini vs Mini ???? Floyd Mayweather’s tiny doppelganger has signed his contract and will go toe-to-toe with “Irishman Mini McGregor” … and it’s all thanks to Larry Flynt. #tmz #tmzsports #floydmayweather#conormcgregor

Would you watch? Well, if you’re the type of guy/girl to get hyped about an Irish MMA fighter chasing an equally repugnant boxer around a ring for 36 minutes, then this should be right up your alley.

If you want to watch this fight, check out HustlerLV on Facebook, or call 702-795-3131 for reservations or a ‘free ride.’ Meanwhile, check out the statement on how tickets are selling for the full-size Mayweather vs. McGregor bout:

According to a report on BloodyElbow.com, there are many good seats unsold, and here’s why:

There’s a reason tons of good seats remain for what was supposed to be the year’s hottest ticket. In their quest to extract every dollar possible, promoters wildly miscalculated their audience. This isn’t boxing, with an established wealthy fan base willing to pay thousands of dollars as they did for Mayweather’s 2015 fight with Manny Pacquiao.

It’s entertainment, much like Wrestlemania, and a good excuse to get a few friends together for a party. But it’s a little tougher to justify $15,000 (plus $1,292.81 in service fees) for two seats in Section 4, Row S of the T-Mobile arena that are so far from ringside you’ll need to spend another $100 for a pair of binoculars to see the action.

The cost of the PPV for UK and Irish fans represents a considerable drop from the U.S. price point, which stands at $89.95 for the standard definition broadcast and $99.95 for high definition.

Gentleman Jeff - Dec 31, 2016 2
By the time you read this, Mike Goldberg will already have called his last fight in the UFC. It only makes sense then to...