You might not actually realize this, but Paulie Malignaggi was a very good boxer back in the day. He’s a former WBA welterweight and IBF junior welterweight champion. Known for his fast hands, athleticism and durable chin, ‘The Magic Man’ went 38-8 in his professional career.

The New Yorker is probably more famous to a lot of people though for his role in Conor McGregor’s training preparations for the Floyd Mayweather fight. He was infamously brought into camp out of shape and footage was released of him being dropped in a sparring session. Malignaggi has never forgiven McGregor for this.

Now the remarkable news has broken that he has agreed to a deal with Bare Knuckle FC. Malignaggi will be back throwing punches again, but this time the gloves will be off as he has signed with the first legal bare-knuckle boxing promotion in the USA. And now he wants to fight Artem Lobov. It just keeps getting better and better.

One thing you have to say about Malignaggi is that he puts his whole heart into everything he does. He’s a very good commentator and analyst because he doesn’t hold back on giving his opinion. He just says things as he sees them. ‘The Magic Man’ is also a very competitive athlete and seems to be excited to get the chance to fight again. He said in a statement: 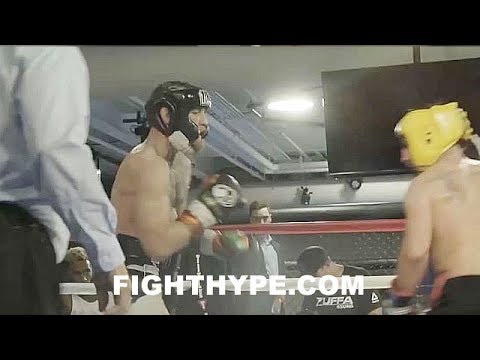 This also goes to show just how quickly BKFC is rising. Forget the likes of Goldenboy MMA, BKFC is definitely the freshest promotion in town. You might not like bare-knuckle boxing because of the number of shredded faces and broken hands, but that primal intensity is exactly what is establishing it a cult audience.

While the majority of the roster is made up of former UFC and Bellator fighters like Bec Rawlings, Ricco Rodriguez and Joey Beltran, Malignaggi is the first boxing world champion they’ve managed to get onto their books. It makes perfect business sense as well, after their recent signing of the legendary Artem Lobov. BKFC President Dave Feldman said:

“At this time in our company’s growth, we needed to add a legitimate and well-established world champion boxer to our roster, and I believe with Paulie’s ability and personality we’ve done just that. Paulie is the perfect fit for us.”

Sources have told me Paulie Malignaggi is about to sign with @bareknucklefc and is expected to fight Artem Lobov if he wins his fight April 6. @PaulMalignaggi @RusHammerMMA

Multiple reports are also flying around that Malignaggi has been promised a fight with Lobov if ‘The Russian Hammer’ gets past his fellow UFC veteran Jason Knight aka ‘Hick Diaz’ on April 6. This would be without a doubt the most high-profile fight in the history of the promotion.

You might even see Conor McGregor there, and just know that’s what BKFC are hoping for.

Darren - Nov 9, 2019 0
Khabib Nurmagamedov has never been more powerful. The UFC lightweight champion is in control of his own destiny. He has rejected a rematch with...

Conor McGregor Responds to Fans Asking Him to Defend Title

REPORT: Nate Diaz Linked to HUGE Title Fight But Not Against...