Nate Diaz Just Doesn’t Care… He Landed a Classic Stockton Slap in His Latest Response to Khabib Nurmagamedov, as Their Online Feud Escalates…

According to Dana White, Nate Diaz actually turned down a fight against Khabib Nurmagamedov. Considering the fact that the younger Diaz brother has a poor record against wrestlers, you can’t really blame him. He wants that money fight against Conor McGregor, and if that means defending ‘The Notorious’ on Twitter, that’s what he will do.

Now Diaz has responded to Khabib again after ‘The Eagle’ sneered the Stockton fighter of hiding behind security at a brawl back in 2015. The fire is definitely burning in this one. Maybe the UFC should just get them all into a cage and just let the last man standing leave.

Khabib and Diaz have a bit of history going back to 2015. They were both attending a World Series of Fighting Event and supporting their teammates when it all kicked off. Diaz threw a bottle at Khabib and that resulted in a big scuffle. Since then the pair hasn’t exactly got along and Diaz has taken McGregor’s side in most of the feuds they’ve had.

You can watch the full footage of the brawl below. It’s a pretty good one. Both of these men have a history of getting involved in unsavoury situations. Khabib remains suspended for his massive part in the UFC 229 post-fight brawl. Meanwhile, Diaz took part in one of the worst ever, at Strikeforce: Nashville in 2010. More recently he had a run-in with Clay Guida at a local MMA event, and there was also the bottle throwing incident with Conor McGregor. 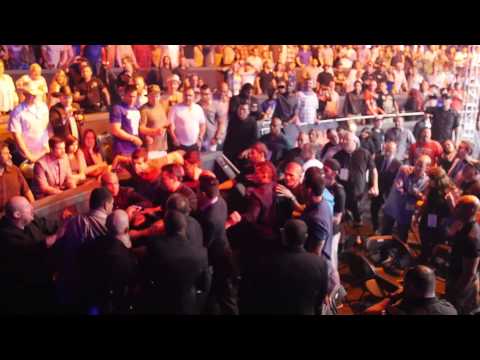 Khabib remains one of the most feared fighters on the planet today. He’s seemingly invincible, with the longest active unbeaten record in high-level professional MMA today (27-0). 11 of those victories have come in the UFC and it will take something special to beat him. He’s lost one round in all of those fights – the third in his title defence against Conor McGregor – and that was just because he was getting his breath back after giving the Irishman the beating of his life.

Meanwhile, Diaz hasn’t fought since 2016, when he lost to McGregor in a very tight decision. He’s been out of action, hoping for their rematch, but it hasn’t happened and it looks like all of the momentum has fizzled out of that one. Who knows if we’ll ever see him fight again.

Dana White raised the eyebrows of many fans as well, when he commented on a fan’s tweet, saying that Diaz had actually turned down a fight with Khabib. If this is true, it’s definitely not a good look for the Stockton fighter. However, Diaz fired back with a furious tweet of his own:

“This f**ker can’t stop making sh*t up about me and I haven’t been offered any fights except the one laughed at.”

GSP: “Khabib is the Best Fighter on the Planet”

Darren - Aug 28, 2020 0
Georges St. Pierre is 39-years-old. The former two-weight UFC champion is also happily retired. In short, he doesn't feel like he has anything to...