Khabib Nurmagomedov’s manager, Ali Abdelaziz, spends much of professional life attempting to secure fights against Conor McGregor. Whether such a fight is for Khabib or one of his other fighters, such as Frankie Edgar, is not of much concern to him.

According to Abdelaziz, he’ll never get to see Khabib take on Conor McGregor, however. As much as he wants to see it and as much as the MMA world wants to see it, Ali believes Conor will continue ducking Khabib until he retires. Conor, he says, simply won’t accept a fight he knows he can’t win.

“It’s a shame. All Irish people I know [are] tough. He’s the only soft Irish I know.” – Abdelaziz told TMZ

Naturally, when word leaked that Tony Ferguson had to pull out of UFC 223, Khabib and his team were hoping a fight with Conor would be handed to them but that was not the case. Abdelaziz would say he continued to get a series of excuses from the UFC regarding the bout as well.

Management Team Can’t Get A Fight With Conor

Abdelaziz is also frustrated he’s been unable to book a fight between Frankie Edgar and Conor McGregor.

After Holloway was forced to pull out of a title fight with Edgar, Conor publicly stated he offered to save the card and step in to face him. Abdelaziz was adamanent that this never happened.

“Let me tell you about Conor McGregor,” Abdel-Aziz said. “He’s like a prostitute, used to make high-dollar money, but she got old and nobody wanted her anymore. This f*cking guy. For three years, he did everything he can not to fight Frankie Edgar.

“He had so many opportunities. Now he wants to fight Frankie? That’s funny.”

Abdelaziz on Difference Between Conor McGregor and Max Holloway

While Abdelaziz was quick to bash Conor McGregor, he was also quick to praise Max Holloway, who Khabib will now face at UFC 223.

“Max is a real Hawaiian Warrior.  Conor is a little European punk; A little Irish punk. It’s man and boys and Max is with the men. Conor is with the boys.”

Much of Holloway’s public persona since winning the UFC featherweight championship has been as the “Anti-Conor”. While Conor doesn’t defend titles after winning them, Holloway is quick to call out his next and toughest challenger. Conor wants to talk smack to his opponents but Holloway will always offer opponents respect when he feels they deserve it.

In many ways, Max Holloway’s way of handling his championship reign is the exact opposite of how Conor handles his.

Check out Ali Abdelaziz’s epic rant on Conor McGregor in the player below: 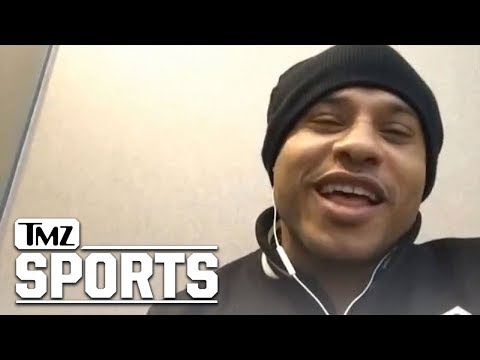 Quote: Conor McGregor is Terrified of his Daddy

Abdelaziz never runs out of things to say about Conor:

“He talk ‘I look good, I’m like Burger King model. Buy my sandwich buy my chicken’. Why he want to fight with a bear like Khabib? He’s gonna kill him!”

“He only fight when he knows he can win. Now he can stick to his Burger King commercials, safe bed, maybe can do Victoria Secret stuff”

Abdelaziz is quickly becoming one of the best smack-talkers in the business.

“I don’t call him Dana (White) these days, he’s my nephew. I call my nephew and they say ‘oh Dana’s not available, his phone’s not charged, he lost his charger, he’s in Syria, so its a whole bunch of bulls**t, but hey Dana’s my guy.”

“You know who’s Conor Daddy? Khabib is his daddy and he’s so afraid of his daddy.

“He knows his Daddy is a half-man half-bear and he has an Eagle claw.”

John - Nov 17, 2020 0
Tyson Fury was hitting the bags and all of a sudden, the ceiling collapsed. Good thing the reflex of the boxer saved him from...