So much happened last night between Conor McGregor and Nate Diaz, but this one interview is being described as the greatest moment in UFC history. Watch it here…

UFC lightweight champion Rafael dos Anjos had to drop out of the biggest fight of his career at UFC 196. He was set to face the featherweight champion and consensus ‘money fight’ Conor McGregor in the pay-per-view main event this coming Saturday March 5, before breaking his foot in training.

Fans of the outspoken Irish boxer didn’t have to wait long for the next opponent to step in, as Nate Diaz took the fight on 12 days notice. All of a sudden, UFC 196 came to life, and last night’s events were simply amazing.

In case you missed it, here is the moment that had everybody going crazy just 12 hours ago: 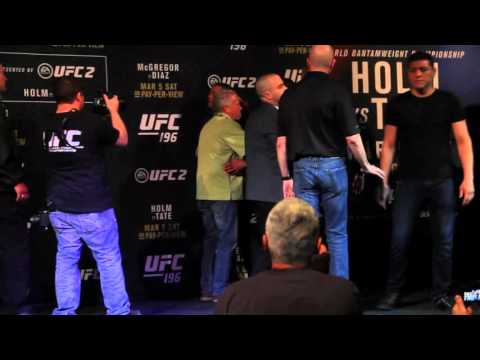 The near brawl that broke out between Conor McGregor and Nate diaz/the 209 crew came as part of a two-fold hype assault from the UFC 196 press conference, and was actually second fiddle to the really eventful post-presser trash talk.