UFC 193 went down seven days ago, but the repercussions of the historic event are still setting in. Formerly dominant champion Ronda Rousey was dethroned by the new bantamweight queen and former boxing champion Holly Holm, in what will go down as one of the biggest MMA upsets of all-time.

Rousey was a ridiculous favorite heading in to the event in Melbourne, Australia, but got shut down and knocked out in the second round of the one sided affair. The merciful finish became a viral video in no time, and ‘Rowdy,’ as well as her coach Edmond Tarverdyan became the subject of many memes and mocking social media posts online.

Who is Edmond Tarverdyan? Check out this video of the e-champ’s coach displaying his Wushu skills: 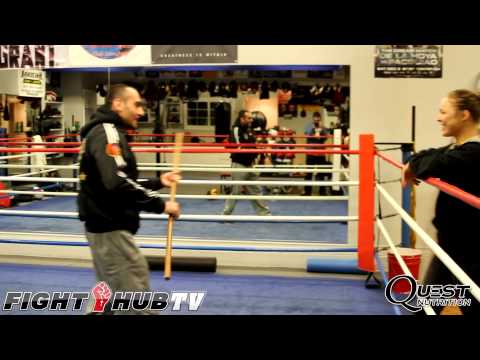 So why is such an obviously talented coach coming under so much fire? Well, take a look at this brief montage simply called ‘Thank You Edmond.’

So the Glendale fighters haven’t been doing so well lately, getting pretty much destroyed in their recent outings. But is it coach Tarverdyan’s fault?

Skip to page 2 to see Holly Holm’s reaction to Edmond’s corner advice at UFC 193, and also Rond Rousey’s Mom blasting the coach, then we’ve got some archived fight footage of Edmond Tarverdyan…

WATCH: Dana White Explodes At TV Host After Being Roasted

Atilano Diaz - Dec 12, 2016 2
Television host Michael Landsberg is known for his swaggering, tough guy style. He’s the host of TSN’s “Off The Record” show, which was cancelled...

Jose Aldo Plans On Taking Dive In Next UFC Fight