Known as the UK’s ‘Most Dangerous Prisoner,’ Charles Bronson’s story is both wild and tragic. Born in Luton, Bedfordshire in 1952 and named Michael Gordon “Mickey” Peterson, he later changed his name to Charles Bronson on the advice of his bareknuckle boxing coach.

By the age of 13, then living in Cheshire, Bronson was part of a four-man gang of robbers. In 1974, at the age of 22, Bronson was imprisoned for seven years. Charged with armed robbery, this was Bronson’s first taste of prison life.

After being sentenced to seven years, Bronson ended up serving more than ten years for bad behaviour. Charges including multiple assaults on prison guards and inmates saw Bronson sectioned and transferred between prisons and wards.

Attempting to poison a prisoner and strangle another with a tie, his captures were becoming increasingly unable to control Bronson. This was when he gained the reputation as Britain’s most violent inmate.

Upon his release in 1987, Bronson took up a career in bareknuckle boxing. Once fabled to have fought a pair of rottweilers, Bronson gained a reputation as a fearless hard man. It was at this time his ties to the underworld became deep.

Fighting in multiple illegal shows, Bronson still indulged in armed robberies. He claimed to have taken part in these fights to help with his anger management. The following clip is the only known video of Charles Bronson fighting. 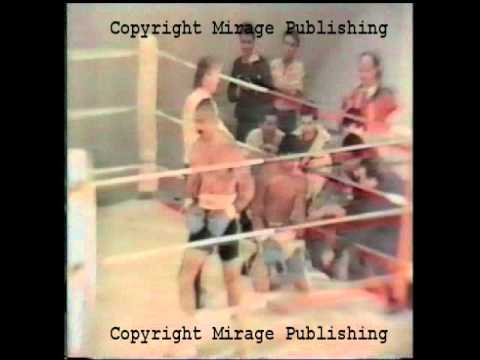 Bronson’s life story has become one of the best selling books in UK history, and later inspired a box office hit movie. In 2014, Bronson changed his name to Charles Salvador to distance himself from his own reputation.

Bronson remains in prison to this day. He enjoyed 69 days of freedom before being imprisoned again. He robbed a jewellery store to get a ring for his grilfriend. Numerous campaigns to free Bronson have not led to his release yet. He remains imprisoned to this date.

“My eyes are bad due to the years of unnatural light I have had. My vision is terrible; I have to wear shaded glasses even to read. Years of solitary have left me unable to face the light for more than a few minutes. It gives me terrible headaches if I do … Years of loneliness in small cells have left me paranoid about people invading my space. I now can’t stand people getting too close, crowding me. I hate people breathing on me and I hate smelly bodies coming near me. Mouths to me are simply for eating – never for kissing … A man needs a routine to cope with such an extreme situation. For me it is my push-ups and sit-ups. I also pace the room and count each step. Some I know lie down on their beds for three hours on their left side, three hours on their right, and three on their back.”

— Humans are social animals, and though he remained in top physical shape, years of solitary created health and psychological problems that made interaction difficult for Bronson.”

Salvador Sanchez - Jul 20, 2017 0
Damn...Conor McGregor drops the bombshell on folks saying he won't fight in the UFC again... It's easy to forget, given the current madness, that Conor...

Seven Perfectly Timed Photos At The Moment Of Knockout