One of the Craziest Stories of 2019 So Far Went Down Last Week, When a Runner Literally Strangled a Mountain Lion to Death With His Bare Hands… Now He Has Finally Explained Just How it Went Down… This Guy Has Balls so Big, He Makes Francis Ngannou Look Like a Hobbit…

Travis Kaufmann was lucky that he forgot his headphones. The Colorado resident was running through Horsetooth Mountain Open Space in Fort Collins, when he encountered a young mountain lion, weighing in at about 40lbs. The fact that the animal was a juvenile doesn’t make what happened any less crazy.

The animal was aggravated by the human running through its territory, and unfortunately, it reacted viciously. It attacked Kaufmann, attempting to maul him. Remarkably, he was able to do save his own life by strangling the wild cat to death with his bare hands.

While it’s sad that it had to happen, he was protecting himself. It was literally do-or-die. Now Kaufmann has explained for the first time exactly what happened.

A reminder that living in Colorado means living among our wildlife. Our website has several great resources, including brochures about how to live and recreate with a variety of species. See our Living with Lions brochure for more information: https://t.co/9t0vPivxdz pic.twitter.com/NvoP9C3pUE

Wild animals are a part of life in this part of North America. Kaufmann is an experienced runner, who knows the area quite well. He explained exactly what was going through his head:

“I stopped and turned,” he said. “And it’s one of those situations where sometimes I turn, sometimes I don’t. But in the back of my mind I always wonder if it’s something dangerous like a bear or a bobcat or a mountain lion, and in this case it was in fact a mountain lion.

“So I remember seeing that and just having my gut feel the full impact of the situation.” 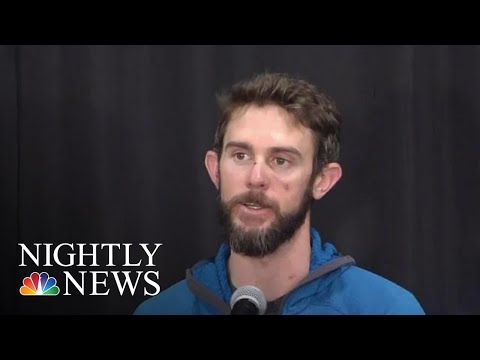 First of all, he tried to fend him off the creature non-violently. But when it literally pounced on him, he had had no choice but to do what he had to do:

“It was going up towards my face so I threw up my hands to kind of block my face, at which point it grabbed onto my hand and wrist and from there it started to claw at my face and neck. And that’s when kind of my fear response turned into more of a fight response. Because I’m a recent cat owner, I know that the back claws are pretty dangerous when it comes down to an attack. And I was pretty worried about its claws just sinking into my stomach and groin area.

“I was able to shift my weight and get a foot on its neck … I stepped on its neck with my right foot and just slowly after a few minutes I thought I would be getting close and then it would start thrashing again and I had a few more scratches that resulted from those thrashes at that point, and I’d say another couple minutes later it finally stopped moving.”

Haufmann clearly needs to start a seminar about how to defend yourself from attacking young mountain lions. What a madman. Rebecca Farrell from Colorado Parks and Wildlife told Buzzfeed:

“It’s definitely not something you hear every day. We know it sounds hard to believe, but his survival instinct kicked in and he did what he had to do.”

“He was a juvenile and didn’t know the risk versus reward of attacking a human versus an animal. It was startled by something running and decided to pounce.”

Darren - Mar 27, 2019 0
What Happens When a UFC and Bellator Veteran Meets a Delusional Traditional Martial Artist? You Know the Rest... Watch the Footage Below... The words 'UFC...