What’s Worse Than the New England Patriots Winning the Super Bowl Again? Just Their Fans Brawling in Boston… Watch the Footage Below as Chaos Kicks off During the Victory Parade…

Normally when your team wins, you’re going to be happy. That’s the normal, natural reaction to victory. The New England Patriots won their sixth Super Bowl championship in 2019, tying them with the Pittsburgh Steelers for the most wins in NFL history.

After their tremendous result – even if you hate them, you’ve got to admit they’re just a ruthless outfit – the Patriots had their victory parade in Boston to celebrate. Now you might think that is a nice idea, as all the fans get to come out and see the team and a festival atmosphere gets created.

Maybe some Patriot’s fans are just too used to winning now. Instead of celebrating like normal people, a large group decided that the best way to show their passion was to start a brawl. This is absolute carnage. 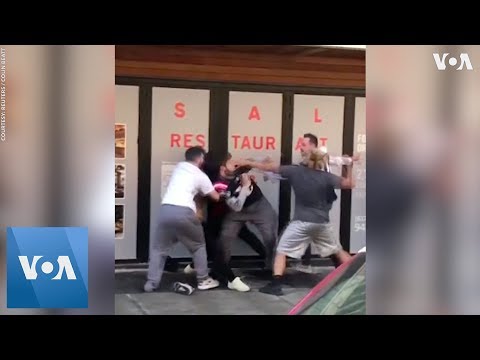 The scenes are absolutely chaotic. A group of thugs – all wearing Patriots shirts – get involved in a ruckus that quickly escalates into a full-scale brawl. First of all, there is pushing and shoving before one guy gets knocked to the ground. Another literally has the shirt ripped off of his back. It’s madness.

Punches get thrown as the brawl becomes more serious. It’s difficult to see how many people are involved, but it looks like there’s somewhere between 8-12 of them, throwing down. Towards the end of the footage, a couple of them can be seen kicking one of the guys on the ground, which is just wrong. There’s no honour in that.

Nothing says Boston like a bunch of Pats fans beating the shit out of each other after a championship parade @OnlyInBOS pic.twitter.com/nd86c36BXe

The beatings the men take are absolutely brutal. Three of them are laid out on the ground at the end, with two of the fallen hardly moving. The onlookers shout out in disgust as the chaos around them kicks off, with kids watching and decent folks just trying to enjoy their day out.

Boston Police Sgt. John Boyle reported that five men were arrested following the brawl, which took place after the victory parade. It’s believed that the fight was alcohol-fuelled. Well, duh. Why else would you be fighting with your shirt off in the Boston winter?

ICYMI: The Patriots won the Super Bowl on Sunday! Check out these shots from our team in Boston, as the parade drew massive crowd of fans!🏈🏈🏈 pic.twitter.com/DlpIOaxeMV

This was one of the biggest victory parades ever to pass through Boston with an estimated 1.5 million people in attendance. When you put it in perspective, a grand total of twelve arrests actually isn’t bad at all. An 18-year old was arrested for allegedly headbutting a 17-year old and breaking his nose. Meanwhile, a 15-year-old was arrested for breaking the window of a train during rush hour, forcing it to be removed from service.

In all seriousness, these guys are probably lucky that they’re just likely to be facing public disorder charges. The way a couple of them fell they could easily have smashed their heads off the ground and that could have caused something way more tragic.

Salvador Sanchez - Oct 27, 2016 0
Surrounding UFC 205 in New York are a number of interesting possibilities. History will certainly be made in the form of the first UFC...