Should Holyfield be allowed to fight Belfort?

After hearing the news that Oscar De La Hoya has pulled out of his fight against Vitor Belfort due to testing positive for COVID, Evander Holyfield has stepped in on short notice to face Vitor Belfort. It will headline a Triller card on September 11, 2021.

One of the important roles of an athletic commission is to make sure fighters are safe or fit to compete in a scheduled bout. If the fight seems unfair on the side or if the fight will look like a one-sided beat down, it is fair to say that the commission shouldn’t allow the fighters to fight.

It is not a direct insult to a fighter but combat sport is dangerous when one side is not even fit to compete at a certain level. The commission also has their rulesets to follow in order to create a safe contact sport, hence there are illegal strikes, banned PEDs which is the need of a drug test every now and then.

Unfortunately, we have seen athletes suffer permanent brain damage or long-term health issues in the past and we cannot avoid it. Some even die inside the ring which is the last thing anyone wants to happen, but the commission is there to make sure that it won’t ever happen by giving their best judgment whether to make the fight happen or not.

Evander Holyfield is scheduled to fight on short notice against Vitor Belfort. Take not that Holyfield might be a multi-division boxing world champion in the past but it still doesn’t change the fact that he is already 58 years old, you heard it right. 58 YEARS OLD! Not only that but his last fight was back in 2011, so 10 years out of the ring.

Watching him do his open workout, it may be hard to watch. Holyfield might be a boxing legend but he looked slow. He still has the power and could beat a normal person but to face younger, faster Vitor Belfort might not be a good idea. 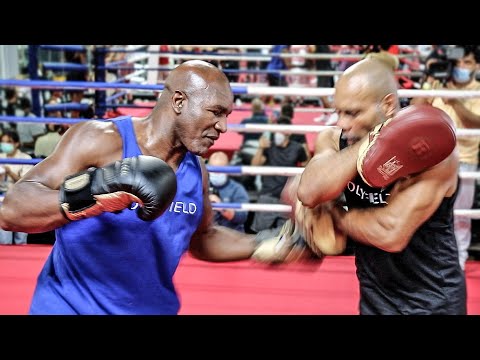 Don’t get me wrong, Holyfield is still in better shape compared to most 58-year-olds and could pull a win, but is it safe? A 58-year-old fighting a 44-year-old former UFC champion that has been staying in shape for the past decade. Holyfield could potentially get hurt if the fight happens.

Do you think Holyfield still got what it takes to compete against Vitor Belfort? Should they allow Holyfield to step inside the boxing ring?