UFC 203 went down in Cleveland last night, and it was everything we’d hoped for. As highly entertaining and fast paced as UFC 203 was, it also had some very bizarre moments. Before the event even kicked off we’d witnessed some bizarre incidents.

During fight week an elevator cable snapped while it was full of fighters. As a result CB Dollaway was removed from UFC 203 due to injury. The focus of this story is about the UFC 203 main event.

The UFC 203 main event featured feared strikers Alistair Overeem and Stipe Miocic. The current heavyweight champion Miocic was looking to put a stamp on his first defense. Boy, did he ever do that.

The first round was wild, with both men scoring big punches early on. Eventually Miocic would get the better of the action, scoring a clean knockout from the guard position. Its not often you see KO’s from full guard on the ground.

An odd accusation emerged after the fight was done. Alistair Overeem claims Stipe Miocic tapped out earlier in the scrap. UFC commentator Joe Rogan ran the tape back, and the Dutchman was certain that Miocic had submitted.

The champion responded with some rather interesting comments…

Continuing the trend of general weirdness at UFC 203, Alistair Overeem says Stipe Miocic tapped out. The Dutch kickboxer claimed nobody saw it happen and so the fight went on. He also says he released the choke because he believed the champion was done.

Here’s the video interview with Joe Rogan, which includes a replay of the supposed tap: 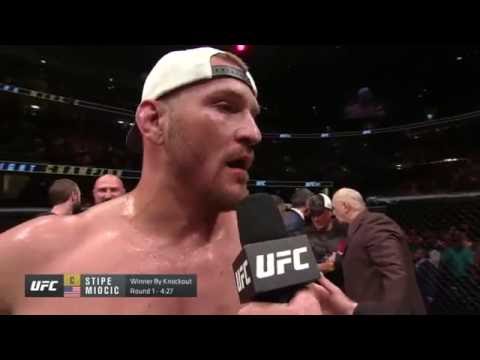 It doesn’t appear that Overeem’s accusations are true judging by the replay. During an interview quoted by MMAFighting.com, Miocic says Overeem was probably still feeling groggy from the KO.

“I just remember signing my check and all that good stuff, and I heard boos,” Miocic explained. “I asked what they (the crowd) were booing about because I knew he (Overeem) was talking, and they told me that he said that I tapped out. I don’t remember tapping out, I just remember punching his face repeatedly until he was unconscious.”

Scrapdigest - Jul 24, 2021 0
Recent research shows that sexual performance anxiety (SPA) affects up to 25 percent of men and up to 16 percent of women. Although SPA...