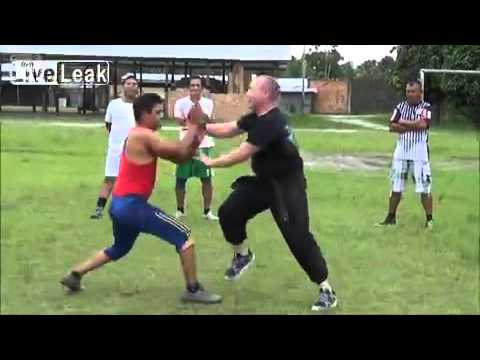 Also, what you couldn’t see in the video is that he was on the ground for an hour, unable to get up. They finally decided to take him to a hospital.

I could have inflicted further damage, or even ended his life. But showing restraint and knowing when to stop after he was defeated earned me the respect of their people and soldiers…..and got me out of there in one piece.

Which is one of my secondary missions when I travel overseas to fight. I’m representing a country, and an art.

I started in San Soo in 1985, then spent time in SoCal during a tour in the Corps. I have trained with what I consider to be some of the great masters. To them I give my thanks. I have also traveled around and worked out with whoever I could.

All body shapes and sizes. From both what is considered old and new school. I spent a tour in the Army (SF) where I was exposed to San Soo spin offs, know it alls, so-called “bad asses”, master of this, master of that. But I never strayed from 100% KFSS. Basic, straight forward, old school, brutal KFSS.

Its all I’ve ever used in combat, street fights, and other encounters such as the one in this video. Its all I need, no matter what.

What that’s given me is perspective and experience. In my opinion, IT’S what the majority of the San Soo crowd is lacking. That and some balls.

I would prefer to stay out of the San Soo politics, and just keep doing what I’m doing.

Most fighters would pull their head back when they see a hand getting close to their face, which would freeze their base momentarily…..allowing for entry (getting close enough to strike).

For whatever reason he didn’t see it coming and impaled his eye socket on my finger. I would have liked the opportunity to have more of a fight. This is just what happened.”

BREAKING: Nate Diaz is Cleared to Fight for BMF Title

Darren - Oct 26, 2019 0
Don't worry folks... the fight is going ahead... Nate Diaz issued an ultimatum yesterday to USADA and the UFC. He told the anti-doping agency to...

Who will end up the UFC Lightweight Champion by the end...