‘Chicken’ is One of the Gravest Possible Insults in Russia, Now Artem Lobov Has Explained Why He Reacted so Harshly to Khabib’s Words… And Why the Russian is a Chicken…

Born in Russia, but raised in Ireland, Artem Lobov is considered by many fight fans to be the GOAT and the UFC’s first potential five-weight champion. Ok, we’re kidding, but seriously he’s got cult status because of his lopsided recorded of 13 wins and 14 losses and his relationship to Conor McGregor basically buying him a spot on the UFC roster.

There’s no doubt the GOAT is a very tough guy. Sure he might lack technical skills, and is about as dynamic as a rhinoceros with one leg, but he’s taken severe beatings from the likes of Cub Swanson and come through bruised, battered, yet defiant.

Now the GOAT has explained why he was so infuriated by his fellow Russian Khabib Nurmagamedov – who is just keeping Lobov’s lightweight title warm – after he called Conor McGregor a chicken. In Russia, ‘chicken’ is a horrible insult with a very dark meaning. 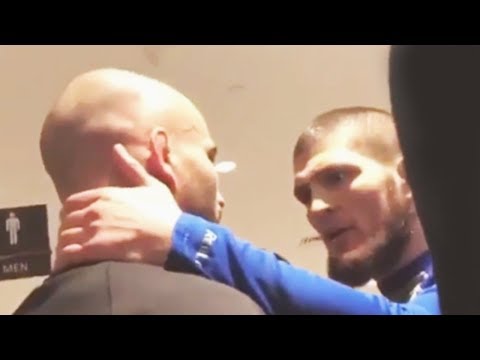 Lobov spoke to ESPN’s Ariel Helwani and explained just why this is such a grave insult. He revealed that it refers to men who are raped in prison, so it suggests emasculation and a complete deterioration of your strength and character. The GOAT said:

“It might not sound very serious to you guys, but just so you know, ‘chicken’ is one of the biggest insults you can give a man in Russia. In fact, if you call someone a chicken in Russia, that is a person that gets raped in prison – in male prison.” That’s what a chicken is in Russia. And Khabib knows that, and everybody knows that. It is a very, very, severe insult.”

That is very dark. Suddenly Khabib calling Conor McGregor the ‘Chicken Man’ is not so innocent as it previously sounded. This rivalry is surely one of the most intense in combat sports.

Lobov went on to explain why Khabib and his crew got so angry back in April, leading to ‘The Eagle’ slapping ‘The Goat’ – there are way too many animals in this article. This would instigate the massive rivalry between McGregor and Khabib, as ‘The Notorious’ would fly to Brooklyn with 20 goons and storm the arena. Lobov said:

“Of course, me knowing the severity of this insult, I had to respond in a hard way. And I think anybody would’ve done the same. If I didn’t do that, then what kind of friend am I? You know what I mean? Of course, my response was pretty harsh, but I spoke facts. I talked about Khabib himself pulling out of fights all the time and the fact that Conor has never pulled out. And I said how could he call him a chicken when he’s the one pulling out all the time but Conor has never pulled out?”

“Look, it was a harsh response, but given the situation, I thought it was an appropriate response. And I didn’t see how I could not respond that way. And to be honest, if I was asked 100 times in the same interview the same question, my response would’ve been the same, even knowing what has happened since then.”

The GOAT is set to take on Michael Johnson at UFC Moncton in New Brunswick. Johnson was a last-minute replacement for Khabib’s teammate Zubaira Tukhagov, who is currently suspended by the promotion, pending an investigation. Like a total legend, Lobov has told Johnson that if he misses weight he won’t accept the mandatory 20% fine.

Lobov has said that he will follow Tukhagov wherever he goes. If he gets cut by the UFC, Lobov wants to get cut too and take on his fellow Russian wherever he ends up.

Salvador Sanchez - Sep 13, 2017 0
After making such a huge comeback at UFC 214, Jon Jones has found himself further down the rabbit hole than ever before... When Jon Jones...

Dustin Poirier gets the LAST LAUGH against McGregor

Kamaru Usman’s Background Story is so INSPIRING, it is hard not...

Thug Rose Tells Conor McGregor to be an “Adult”