Now this is something you don’t see every day. Female bodybuilding champion vs. female boxing champion in the ring…

Ever since mixed martial arts became popular, a fixation of MMA fighters vs. bodybuilders has been present. In fact, that obsession is similar to how the ‘wild west’ days of the UFC transpired.

Perhaps the best example of this adage is Royce Gracie, widely considered the driving force in the early days of MMA. Winning three UFC tournaments between 1993 and 1994, Gracie was often outweighed by hundreds of pounds.

Standing just six feet tall and weighing 80 kilograms, what separated Gracie from his opponents was his superb level of skill. Today’s story is interesting in contrast, almost the complete opposite of Gracie’s famous story.

Bodybuilding champion Britt Miller competed four times in one night at a boxing charity event. Although in aid of breast cancer, the fights were taken very seriously. Miller, who is known to have no boxing background at all, faced an amateur female boxing champion in one of her fights.

During the 60 seconds of action against the two-time amateur boxing champ, Miller scored multiple knockdowns. Unlike the old ‘skill beats size story,’ Miller battered the former boxing champion with a quick KO win.

Watch Britt Miller terrorize and finish her opponent at the ‘Battle for boobs’ show: 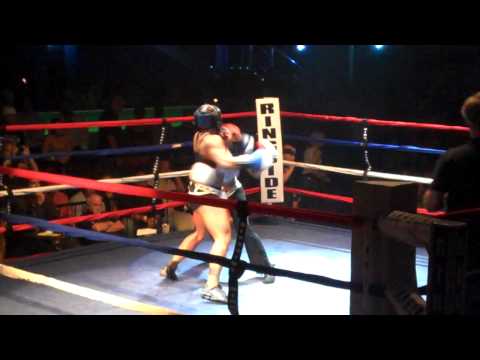 Funnily enough, the shredded female bodybuilder wanted to be a basketball star in college. As per her biography on Brittmiller.com:

“I played basketball while I was in high school and had planned to play in college. But towards the end of high school, I became 100% focused on trying to put on muscle size for bodybuilding. I also played softball my senior year. I then started to spend most of my free time training at the gym which ended up being to my advantage because my strength had increased and really helped me to succeed.

I have been lifting seriously since I was a freshman in high school. Although I couldn’t take weightlifting as a freshman in school, I did manage to work out everyday. The coach of the weightlifting class went to the gym that I went to in the mornings before school. Since I wasn’t old enough to drive, my mom would wake up and take me to the gym every morning at 4:30am. I would work out, do cardio, tan, take a shower, and then I would ride to school with the coach.

This is how I trained to compete in my first competition. I competed in my first figure competition, the Quincy Roberts “Elite,” when I was a freshman at 14 years old. I looked awesome for my age, but yet I was obviously a little underdeveloped! I think I was about 110lbs! It was a great experience and I fell in love with the enviornment. It was a big thing for me to become a sophmore because I could take weightlifting class.

Joe Rogan Talks About Mike Goldberg For The First Time On...

Conor McGregor’s MMA Career Could Be in SERIOUS Jeopardy