Domestic violence has always been an extremely unacceptable crime. Regardless of gender, beating on one’s spouse in considered one of the most disgusting acts a person can commit in a domestic setting.

When domestic violence involves an aggressor trained in some form of combat, it steps things up a notch. That’s why when boxers or trained fighters beat on their partners, it gets a lot more attention in the media.

You might not recognize the name Julian Wallace. He’s an Australian MMA fighter who is most notable for his part in a viral video. In the video, Wallace faced Ben Nguyen in a tense 43-second clip.

At the weigh-ins, Wallace (heavily tattooed on picture left) tried to intimidate Nguyen. Unfazed by Wallace’s aggression, ‘Ben 10’ smashed his opponent in just 20 seconds. The video got over 50 million hits through various uploaders on Youtube and more on Facebook.

Just to refresh your memory, here’s the clip: 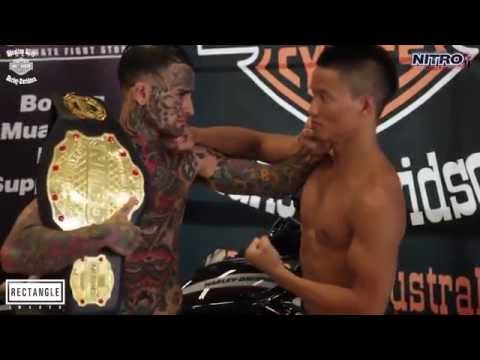 The clip was satisfying for many reasons. Released at a time when bullying was being put on the microscope, the ‘viral MMA fighter’ video was destined to be watched by millions upon millions.

Now we learn that infamous clip is satisfying on a whole new level. No longer is it just because Wallace tried to bully Nguyen at the weigh-ins, it turns out the barber shop owning MMA bully is also a woman beater.

Wallace With His Now Ex-Fiance Jessica

Gruesome and worrying reports have surfaced about Julian Wallace and charges he faces in Australia. Harrowing stories have been floating around, but finally a detailed report of exactly what happened between them has emerged.

After getting a beatdown in front of millions on Youtube, viral MMA fighter Julian Wallace is facing serious jail time for his latest fight…

Continue to page 2 for the horrible report…

Darren - May 16, 2018 0
Nate Diaz is Being Investigated by the Sacramento Sheriff's Department for His Role in the Combate America's Brawl Last Weekend... If he does get charged,...

Does Conor McGregor still have the competitive hunger in him?