This one was never in doubt. Amanda Nunes is officially the most dominant bantamweight champion since Ronda Rousey. She was a significant favorite going into this fight against Raquel Pennington, and boy did she back those odds up.

UFC 224 took place in the Jeunesse Arena, Rio de Janeiro, Brazil. As is traditional for every single UFC event, the build-up was steeped in controversy and drama. A number of UFC staff were robbed at gunpoint, while highly-touted prospect Mackenzie Dern missed weight by a whopping 7 pounds.

It was good to get down to some action. Nunes was coming into this off the back of a tight win over Valentina Shevchenko. This was her third defense against a game but limited challenger in Pennington, who knew that this was likely to be her final shot at winning the belt.

This one was also noteworthy because it was the first time two openly gay fighters were facing off in the octagon. Nunes typically launched powerful strikes from the start and concentrated on mauling Pennington’s leg with vicious kicks. For the first two rounds ‘Rocky’ was under pressure, trying to counter strike, but taking damage.

At the end of the second, she managed to get the clinch and take ‘The Lioness’ down, after taking a beating for most of the round. The third round was possibly the most even, or least eventful. Pennington had more energy and tried to trade with the champion. It went to the floor and Marc Goddard was forced to bring them back to their feet.

In the fourth and fifth, Nunes continued to unleash a striking clinic, hurting and demoralizing her opponent. Pennington actually asked her coaches to pull her out before the fifth, but they forced her back in. A bad move because she succumbed to Nunes’s punches and was left battered and bloody.

The failure of the corner to respond to their fighter’s wishes caused controversy after the fight. In MMA it’s very rare that corners will intervene to end a fight, even when their fighter is taking a brutal beating. Nunes insists that Pennington’s corner let her down.

“I think my coach wouldn’t let me go through that. It’s sad,” Nunes told Megan Olivi. “Everyone must be saying a lot of bad things about him on social media, but I really think she needs to surround herself with people who want the best for her so she can really evolve for her next fights. Unfortunately, tonight the cornerman failed.” 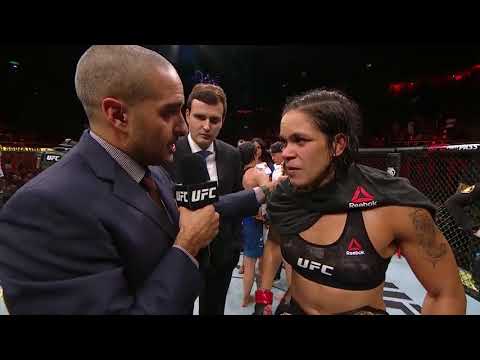 Lyoto Machida made it two wins on the trot after head-kicking Vitor Belfort into oblivion, in possibly the latter’s final fight. It was a stunning finish. Kelvin Gastelum took a narrow win over Jacare Souza to push deeper into middleweight contention. Elsewhere, Mackenzie Dern managed to get a submission win over Amanda Bobby Cooper.

There’s no doubt though that this night belonged to Nunes. Now that she’s got three title defenses on the bounce and is riding a 7-fight win streak, the UFC might finally try and give her some decent promotion. She speaks English well, has charisma and is openly gay. Surely they are missing a trick by not doing so?

Gentleman Jeff - Nov 29, 2016 0
Jose Aldo is once again the UFC featherweight champion, and there doesn't appear to be anymore discussion regarding his retirement. Aldo spoke with media in...