Brazilian Jiu-Jitsu is one of the most popular martial arts on the planet right now. Although it first entered the public consciousness in the early 90s, thanks to Royce and Renzo Gracie, it’s really having a moment right now. Every celebrity worth their salt seems to be putting on their gis, with Jonah Hill, Tom Hardy, Demi Lovato, Guy Ritchie and Keanu Reeves, and Ashton Kutcher just some of the big names training in the art right now.

Participants in Brazilian Jiu-Jitsu have a reputation for not being meatheads. Unlike the striking arts, you can’t bluff your way through BJJ. You need to have the ability to think critically, analyse your opponent, and do the techniques properly. Black belts hate rolling with blue belts because they actually have more chance of getting injured by stray knees or elbows.

It’s rare that a brawl kicks off a BJJ event, but one definitely did at the weekend in Brazil. Watch as Felipe Pena ignited a brawl after sprinting into the crowd and attacking multiple spectators. 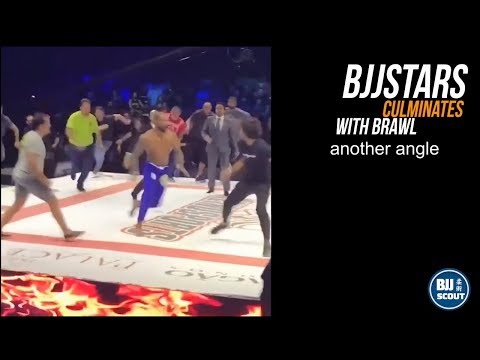 This definitely was reminiscent of Khabib Nurmagamedov launching himself into the crowd at UFC 299 in Las Vegas last October. This time around chaos took place at BJJ Stars: Black Belt Edition, in Sao Paulo, Brazil. Erberth Santos was the instigator, after seeing red following an alleged injury. The IBJJF champion took on ADCC world champion Felipe Pena.

Santos claimed to be injured after Pena attempted to sweep him. This resulted in the match being called off. In the meantime, Santos got into it with one of Pena’s black belt students, reported to be Daniel Thebit. That’s when it got out of control with a mob of fans joining in with the brawl.

🤨🤨🤨 so this that brawl that happened at some BJJ Tournament 🧐 pic.twitter.com/8muSHX0ccx

The event staff and stewards had the thankless task of trying to break the crowd up. However, Santos was able to break free from the people holding him back and went for Servio Junqueiro, another black belt on Pena’s team. It was total carnage for a few moments.

Santos has a history of being a volatile personality. It’s unknown at this point what sanctions he will face, as BJJ does not have a singular governing body. He’s surely set to face some sort of ban though. Not a smart move.