Jon Jones just can’t stay out of trouble. The UFC light-heavyweight champion is his own worst enemy. Police arrested him again on multiple charges including aggravated DWI and negligent use of a firearm. The arrest occurred at 1 am Thursday morning in Albuquerque, New Mexico.

He’s no stranger to the law.  There have been multiple street fights as well as drug use. Not to mention that pregnant woman hit-and-run. As Conor McGregor once said, Jones needs to sort himself out a driver. Surely, he could get that written into his UFC contract? You’d imagine Dana White would do anything to keep him on the straight and narrow.

Anyway, police released bodycam footage after the arrest. Check out the clip below, courtesy of MMA Fighting and the Albuquerque police department. What do you think will happen to our favorite repeat offender? He never learns his lesson. 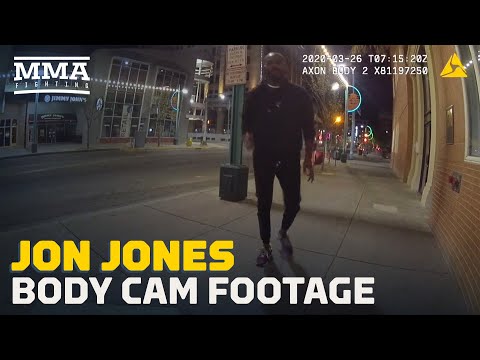 In the clip, police ask Jones if he drank before getting into the car. He replies that he had vodka earlier. They then breathalyze him and ask him to step out of the vehicle. The next part is painful. They asked him to walk in a straight line but he flunked it miserably.

Jones flunks all his sobriety tests. He brings up short-term memory loss as a result of being “punched in the head” for a living, as well as ADD, anxiety, and his daughter’s dyslexia while performing tasks involving walking in a straight line, counting backward, and reciting the alphabet.

The police find a bottle of mezcal in the car. Incidentally, it was Jorge Masvidal’s personal brand so some nice free publicity for him. But the worst part is the discarded black handgun and empty shell they discovered. This isn’t going to look good for Jones in court.

If Jones wasn’t a repeat offender he’d probably get away with a slap on the wrist. But he’s been in similar situations multiple times and never learns his lesson. He could argue that he was trying to social distance and the gun was to scare away strangers. That seems fair to us.

You can check out part of one of the officer’s statements below. Officer Jason Brown was the first on the scene. He later requested for back-up. Officer Brian Johnson then arrived in support. Brown wrote:

“I asked the driver to hand me the bottle. I also observed that he had green leafy substance on his shirt and pants, consistent with marijuana. I identified the driver as Jonathan Jones. I asked Jones about the gun shot and he stated he did not know. I asked him why he was out and he stated he wanted to go for a drive. I asked him for his vehicle registration and proof of insurance. Jones fumbled with his documents and was not able to locate proof of current insurance. I also observed that Jones had an odor of alcohol coming from his facial area.

I requested the assistance of a DWI officer. Officer Johnson was working a DWI saturation patrol and responded to my request. After Officer Johnson completed his investigation, he placed Jones under arrest for DWI. I had the vehicle towed from the scene. During an inventory of the vehicle subject to arrest and tow I located a loaded handgun under the drivers seat. I also located a spent round just outside the drivers side door. The spent round was the same caliber as the firearm that was located. A video of my investigation will be uploaded to APD evidence. The handgun was tagged into APD evidence.”