Chuck Liddell’s training has stepped up a level. The Iceman is set to take on Tito Ortiz this coming fall under Oscar De La Hoya’s Goldenboy MMA. Ever a fan favorite, there’s been a lot of public interest in Liddell’s return and preparations.

‘The Iceman’ has a lot of questions to answer. The elephant in the room is that he’s 48-years-old – potentially 49 by the time they fight. He hasn’t stepped into a cage since getting knocked out by Rich Franklin in 2010.

The former UFC light-heavyweight champion lost five of his final six fights with the promotion – four of those by KO. Those are damning stats. Chins don’t grow back with age. Having said that, he’s set to make a bucket load of cash and Tito isn’t a spring chicken either. You can see footage of his preparation below.

The footage shows retired kickboxer and current Professional Fighter’s League president Ray Sefo holding the pads for The Iceman, as Liddell puts together some combinations of hands and feet. His switch kick is nice, but it’s not exactly the most inspiring footage you’ll ever watch.

Sefo gave a reason for this later, telling fans not to be disheartened. Allegedly they were just training light and will step it up as they get closer to the big day. I’ll leave that to you whether or not you believe him or not. He said:

“People first of all that was the first time Chuck and I did pads together, secondly we were just moving around lightly so I don’t know why all the criticism when his fight isn’t till November.” 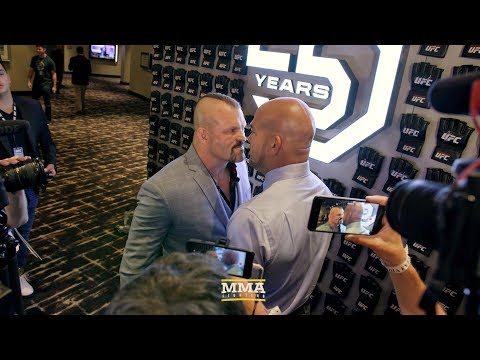 UFC President Dana White has made no secret of the fact that he doesn’t want Liddell to fight again. However, the Iceman hasn’t taken his advice. He doesn’t want an executive’s job. He wants to hit people and take the glory. It’s a massive risk because this is what the next generation of fight fans will remember him for.

“I miss it. I never stopped missing it,” Liddell explained to TMZ. “And I kinda hadn’t really thought about it much. And then when he brought it up and we started getting going, and I started training and I started doing stuff again, getting ready to try to take this on, it made me go, ‘You know what, what if he pulls out?

Am I not going to fight? Am I going to do all of this and not fight?’ Oh no, we had to have somebody backing up, and if it doesn’t work out with him, I’m [still] going to give it a shot. It’ll be somebody else, one of the guys from my past probably, most likely, and we’ll see where I’m at.”

You’d be forgiven for questioning the heat of this rivalry. The last time Liddell and Ortiz fought was back in 2006, with their previous bout coming in 2004. 12 years later they’re set to go at it again, in the main event of Oscar De La Hoya’s debut as an MMA promoter.

The date, venue, and price of the pay-per-view are all yet to be disclosed. However, we do know it will be in 2018, probably in the fall, and that the entire undercard will be MMA. It will be very interesting to see how many fights De La Hoya sets up and what sort of fighters he signs.

Salvador Sanchez - Feb 21, 2016 0
Is this the first time we've seen this submission landed in active MMA competition? Honestly can't remember anyone else locking up one of these...