WATCH: Cody Garbrandt Walks Out On Dominick Cruz During Interview

In the lead up to fight night, things pretty much get heated. UFC bantamweight champion Dominick Cruz has never been afraid to fire off a little trash talk. But the rivalry between Cruz and challenger Cody Garbrandt has reached unusual heights.

With both men facing each other in the co-headliner of UFC 207 on Friday, December 30, the tension outside the Octagon has hit a fever pitch. Garbrandt stormed off from a television interview between he and Cruz, threatening to come to the room where Cruz was sitting.

Dominick Cruz and Cody Garbrandt Have Been At It For Weeks

The fuming exchange between Cruz and Garbrandt aired on The Fight Network in Canada on Wednesday. When the interview’s topic touched Garbrandt’s girlfriend and Cruz going at each other on Instagram, things got out of hand.

“She shouldn’t be hollering at me on social media. Keep her to yourself. As far as I’m concerned, I did you and her a favor. She obviously wears the pants in the relationship or else she wouldn’t be having to defend you,” Cruz said.

In late November, Garbrandt’s girlfriend uploaded an old, screenshot to Instagram mocking Cruz’s only career loss at the hands of Urijah Faber at WEC 26.

The post was seemingly done in retaliation for a similar social media post by Cruz that showcased Garbrandt suffering a brutal knockout loss back in his amateur days. 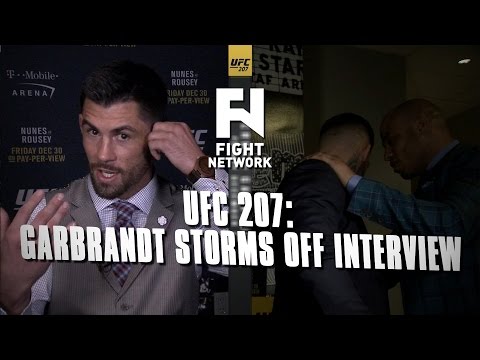 Things took a curious turn as Cruz appeared in the comments section and warned Garbrandt’s significant other to not “get involved in big boy stuff.”

When Garbrandt heard what Cruz said about his girlfriend, it was the final straw in Garbrandt’s patience. He threatened to come to where Cruz was and start the UFC 207 co-main event bout 48 hours early.

“I’ll come across there right now,” Garbrandt stated. “You’re a room away.”

Garbrandt told the attending technician to unhook him. He proceeded to get up and walked out.

Cruz continued the tirade on-air, stressing that Garbrandt has a need to perceive himself as an alpha male but he can’t help his behavior.

Cruz stayed on camera the whole time, while Garbrandt was throwing things and cursing off camera.

“He has to do this, because this is what an alpha, a savage does,” Cruz mocked.