You’d think with all of Conor McGregor’s money he’d be able to afford a couple of anger management classes. The former UFC featherweight and lightweight champion has had a glittering MMA career, rising from being unemployed in Dublin to becoming the most financially successful fighter in the history of the sport.

All of that is going to be for nothing though if he keeps going the way he’s going. McGregor just can’t stay out of trouble. He’s been arrested multiple times and had to settle numerous cases out of court. Now damning footage has emerged of him throwing a sucker punch at an old man in a bar. The story isn’t new, but the CCTV clip has only just been released.

You just can’t do that. It doesn’t matter whether or not McGregor is a public figure. It’s still a scumbag move and one of the reasons why he’s losing a lot of fans. Check out the footage below, courtesy of TMZ. 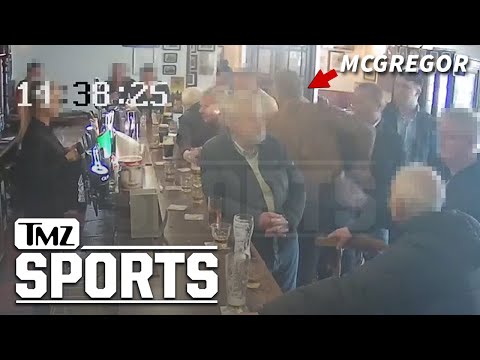 It’s clear from the clip above that whatever was said or happened, McGregor definitely threw the only punch and it was a very sly one. The Irishman was in The Marble Arch Pub in Drimnagh, Dublin when the incident went down. It’s alleged that he poured a number of shots of whiskey – his own brand which shall not be named – and sent them down the bar.

The elderly gentleman allegedly declined to drink McGregor’s bog water. This didn’t sit well. Now we don’t know how offensive the guy was to the UFC fighter, but anyway, a punch was thrown. The old man, to his credit, ate it like it was nothing. McGregor was then dragged away by two of his handlers. It’s not a nice incident to watch and definitely not good for McGregor’s declining public opinion at all.

This isn’t the first incident McGregor has been involved in. No, as we all know he was arrested after storming Brooklyn’s Barclay Center and damaging a bus, injuring multiple fighters in the process. He avoided jail time and got community service for his troubles. McGregor has also been accused of sexual assault in the last year, as reported by the New York Times.

The story was going around in Ireland before this that an unnamed high-profile Irish athlete had been arrested in relation to an incident in a hotel in Dublin. A media embargo prevented Irish media from naming the UFC fighter. So far the Irishman has not been charged, although that could change.

You’d think that would be all, but no, there have been multiple petty incidents as well. He’s had speeding fines and bans for driving over the speed limit. McGregor also had to settle out of court after smashing a dude’s phone in Florida, USA.

He’s also had a couple of incidents with referee Marc Goddard, most infamously storming the cage during a Bellator event in Dublin, pushing the MMA ref. The Irishman is just getting tedious now.