It’s good to have him back. Nate Diaz and his older brother Nick were two of the most popular fighters in the UFC, because they keep it real. In an age of Henry Cejudos and Colby Covingtons, it’s good to have fighters like Diaz and Jorge Masvidal who say it how they see it, while putting on entertaining fights at the same time.

The younger Diaz hasn’t fought since his contentious decision loss to Conor McGregor in their rematch back in 2016. He’s sat on the sidelines while the UFC appeared to pass him by. There were reports that he was waiting for the trilogy fight, although he was booked to fight Dustin Poirier last year. That fell through and now ‘The Diamond’ has a title shot.

Now Diaz is finally set to come back against Anthony Pettis. The pair are fighting at welterweight and look to put on one of the fights of the year. Check out how Diaz sparked up a CBD joint at the open workouts – not exactly bringing a smile to Dana White’s face.

The Diaz brothers are known for their love of cannabis-based products. Now that CBD is all the rage, they’ve opened up their own line. They’re also fond of the real thing. Nick was ludicrously suspended for five years after testing positive for marijuana after losing to PED-filled Anderson Silva.

That suspension was reduced because it was absolutely insane, but the elder Diaz still hasn’t fought since it was lifted. He’s shown no signs of wanting to come back and fight again either. Now that Nate has a young son, he’s motivated to get back out there and make some more money for his family.

Diaz said the joint was CBD, his own line from Game Up Nutrition. CBD is legal in- and out-of-competition in the UFC’s anti-doping policy. Diaz said he’ll have to save the THC for after the fight since it’s prohibited in-competition.

So there could have been a subtle dig at the UFC when Diaz decided to light up a joint at the UFC 241 open workouts. They probably had their hearts in their mouths when he sparked up because marijuana is still a banned substance by most of the athletic commissions in the US. However, it has been confirmed that it was all about appearances for Diaz, and his joint contained no THC.

After accusing the UFC of trying to make him vanish after the McGregor rematch, Diaz definitely doesn’t care that much about keeping up the appearances of the organization. Both of the brothers have had a fractious relationship with the promotion, and many believe that their star power has been underused. 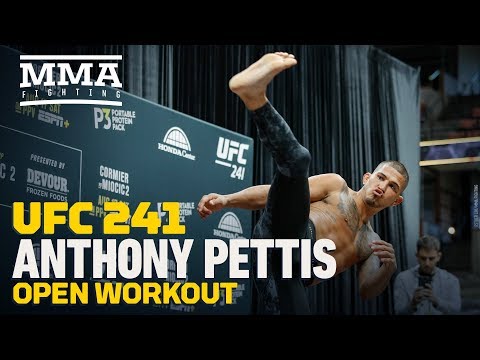 Diaz said that he’d enjoy the real thing after beating Pettis. He then went and passed the joint into the crowd like a boss. It’s hilarious how he came off as more of a badass for lighting up a fake joint than Colby Covington did when he brought along three adult models.

Anthony Pettis’s workout was much more standard fare, although he did demonstrate devastating speed with his kicks. We really hope that he’s paying his training partner enough money because that’s frightening. This promises to be a great fight.

Who is Next For Jon Jones?