It’s been quite the week for Conor McGregor. First of all, he made waves by announcing his comeback date. He’s set to fight on January 18th, as confirmed by the UFC. However no deal has been signed, nor has an opponent been selected. That’s enough to drive the Twitter mobs into a frenzy.

McGregor has been having a great time in Russia. If you follow his Instagram you’ll see that he was staying in Ritz near Red Square. He’s been making himself very accessible to media as he attempts to market his whiskey. However, organizers have been very clear about the types of questions to be asked.

But one of Khabib’s fans must not have got the memo. A Dagestan native made his way to one of McGregor’s events to confront the Irishman. In short, the Irishman is probably lucky that he just had a bottle thrown at him. 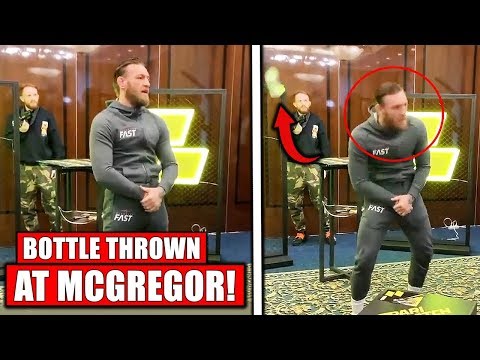 McGregor is not a fan of the autonomous state of Dagestan. His arch-nemisis Khabib Nurmagamedov hails from that area of Russia. It’s an impoverished mountainous region, noted for being primarily Islamic. Despite speaking highly of Russia in general, McGregor had nothing good to say about Dagestan or Khabib. He said:

“Where’s my location? The Ritz Carlton. I’m in the Ritz Carlton if anyone wants my location, right in downtown Moscow. Where is he right now? I believe he’s out of the country. I fly in, he flies out. Typical of the Dagestani man.”

Later when asked if he had ever been to the region he responded:

“I wouldn’t go to Dagestan to take a s**t. And that is the truth.

@TheNotoriousMMA has bottle thrown at him while explaining why he disrespected the people of Dagestan 😬 pic.twitter.com/n56ackT8lN

The former champion spoke to some journalists after an open workout. As we said before, questions have been heavily filtered. For example, anything to do with the allegations of sexual assault are not allowed. One Dagestan man didn’t care though. He shouted at McGregor:

Despite the attempts of security to silence him, he still got his message through. In fairness to McGregor, he stood and responded to him. It threatened to get ugly though. He should probably never go to the state where many residents still have semi-automatic assault rifles in their homes.

‘The Notorious’ is still holding a grudge against the region. Supermarkets in the state sold chickens branded with his name on them. It was clearly intended as a slur against the former two-weight champion. Then he told the aggressor:

That’s when the bottle flew. McGregor quickly dodged out of the way like he dodged those rape allegations in his press conference. Then he kept telling the Dagestan man to ‘shut up you fool’ in a bizarre accent. He’s never boring, is he?