He might never have been a professional fighter, but there’s no doubt that Joe Rogan eats, sleeps, and breaths martial arts. The 51-year-old comedian and commentator have been with the UFC since 1997, making his debut at UFC: 12 Judgement Day, in Alabama. You know he’s a veteran because this is back when they had names.

Since then he’s called the fights of practically every legendary fighter on the roster. He’s a walking, talking encyclopedia of MMA knowledge and is not afraid to voice his opinion when the company isn’t doing something right, for example with referee decisions or how they treat some fighters.

He’s also a very experienced martial artist in his own right. A black-belt in Taekwondo, he graduated to Muay Thai and also has a black belt in Tenth Planet Jiu-Jitsu. In the footage below, you can see him rolling backstage with former champion Mark Coleman.

Mark Coleman is the epitome of a UFC legend. The inaugural UFC heavyweight champion of the world, he was inducted into the UFC Hall-of-Fame back at UFC 82. He’s also a former US Olympian as well as a Pan-American gold medallist.

Perhaps his most interesting legacy is that he practically invented ground-and-pound, being one of the first fighters to effectively combine ground striking with his highly effective wrestling. One of the true greats of the organization, he’s still highly regarded by the company and is regularly present at different fight cards. 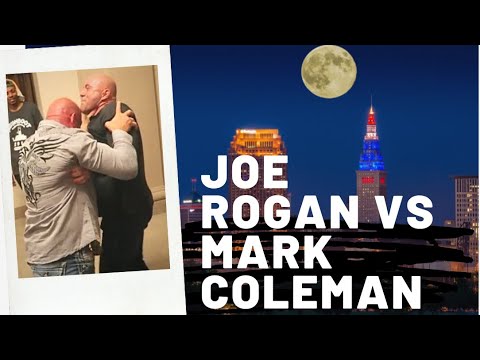 In the footage above you can see that despite his best days being far behind him, Coleman is still an absolute beast compared to the rest of us mere mortals. Taken on the eve of UFC 203, in Cleveland, Ohio, back in 2016, it shows Coleman and Rogan having a bit of fun backstage.

Rogan is dressed in his shirt and slacks and decides to wrestle with one of the best in the business. He struggles to cope with Coleman’s ferocity and it ends with him being flung against the wall, swatted aside like a fly. That can’t be good for your back.

It’s all good-natured, but he is absolutely ragdolled. It just shows the difference between someone who is an elite professional martial artist and a very decent, proficient amateur. Bear that in mind next time you think of picking a fight with an MMA fighter. 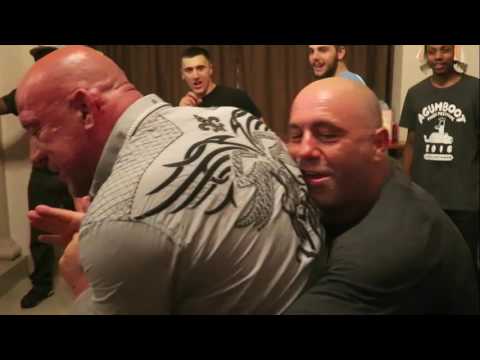 Rogan almost fought a professional mixed martial arts fight against legendary action film star Wesley Snipes. A four-time Taekwondo state champion, and with BJJ experience under Eddie Bravo and Carlson Gracie, many believed that Rogan had enough in his locker to beat the star of the Blade series.

Snipes, who has done time in prison for tax evasion appeared to back out, despite Rogan training for a number of months for the encounter. It could have been the Logan Paul v KSI of its day, but sadly it was never to be. Who do you think would have won that fight?