Should you start a fight with strangers on the street? If modern history has taught us anything, it’s that you never know what someone is capable of. Appearances can be deceptive, especially as martial arts training is so widely available now.

Fighting is dangerous no matter where you practice it, but in the streets you could argue it’s way more hazardous. Most people would rather film you getting your ass beat than help out. Hence why there are so many videos of fights on Youtube and social media.

Cory Gets KO’d (video down the page)

During this recently uploaded video, we get to see the exact subject of today’s article. The very reason you shouldn’t mess with random dudes on the street. This drunk frat boy tried to act hard in front of his girlfriend, and it really didn’t end well for him.

As the scantily clad vixen urges her man ‘don’t do it Cory!’ he decides to anyway. Information later emerged via mixedmartialarts.com that the larger man is in fact an MMA trained bouncer. Big mistake Cory, BIG mistake.

You can watch the full video on the Youtube player below, turn the volume up! 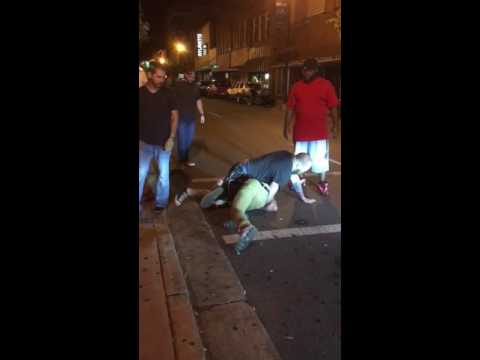 That Had To Hurt

Following his nice punch to drop the attacking douchebag, the bouncer showed great restraint. In many other scenarios, the same cannot be said. This man was lucky he did not suffer a few soccer kicks for his troubles.

Meanwhile, in Russia, gangsters decide to bully a professional boxer. He is allegedly in a nightclub in Russia when hoods from the local mafia harass the boxer’s girlfriend. They go outside, and the inevitable knockouts go viral.

Cehck it out on the Youtube player below, but turn the volume down!

Finally, once again in the land of awesome fight videos and craziness, we have another ex-boxer. This time he is facing two drunk dudes that are trying to extort money from him. The two bandits judge the book by it’s cover and pay a heavy price.

You can watch that video on the Youtube player below:

Darren - Jan 18, 2019 0
The Former UFC Bantamweight Champion and Pioneer for Women's MMA is Starring as Sonya Blade in the Latest Installment of Mortal Kombat... It's a match...

Vasyl Lomachenko is BACK! MAKES a STATEMENT!