WATCH: Ginger Crackhead Conor McGregor Was Hiding From Me

Getting scheduled for the fight against the lightweight champion in November brought in a wave of hate against McGregor. The Irish striker will not defend or even be stripped of his featherweight belt, that decision has led to outrage among fellow fighters and fans.

After news broke that Mcgregor would not defend his 145-pound title, Jose Aldo swiftly announced his retirement. The interim champion has been angling for a rematch with his rival since their first fight at UFC 194. In that time McGregor has fought twice at welterweight against Nate Diaz, and will next compete at 155 pounds.

Bringing up a heated debate about rankings against monetary incentives, McGregor v. Alvarez has certainly caused quite a fallout. Going back to the UFC 205 press conference, Eddie Alvarez wasn’t the only one taking some grief from Conor McGregor. UFC featherweight contender Jeremy Stephens blasted McGregor on stage, here’s the video of that moment: 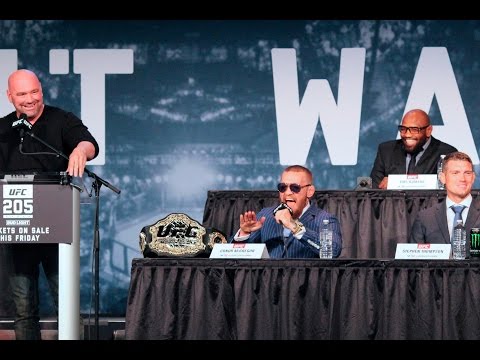 Shutting down Jeremy Stephens in front of everybody watching and at Madison Square Gardens has caused a rivalry to form. Tons of memes and such about Stephens getting ‘owned’ flooded the forums.

The people that aren’t the biggest McGregor fans saw this as a bit of a silly moment, but Jeremy Stephens certainly didn’t. Firing back at McGregor during a heated rant, ‘Lil’ Heathen’ had the following to say:

“I’m not sure what that fire crotch said, I couldn’t really hear at the presser. It didn’t really matter. I went backstage and that little leprechaun wanted no part of it. He locked himself in a room. He talks a big fictional character up but he didn’t want to back it up, he was locked in a little room. Hopefully he’ll step up to the plate and fight a real savage like me. You know I’ll mop the floor with that little ginger crackhead any day.”

Shots fired! Although he may not be as well known as Conor McGregor for his trash talking, Jeremy Stephens made a good comeback here. If he beats Frankie Edgar at UFC 205, now that Aldo has retired, it copuld be Stephens vs. McGregor for the featherweight title next.