There Has Been a Furious Response by Conor McGregor’s Countrymen to His Most Recent Controversy… And Now an Irish Bartender in a Florida Irish Bar Has Gone One Step Further and Poured All Their Stock of Proper Twelve Down the Toilet… Taste the Difference?

Conor McGregor attracted disgust and fury last week for allegedly punching an elderly gentleman after the man turned down a shot of the Irishman’s own brand of whiskey. Now we don’t know what the guy said to ‘The Notorious’ but most reasonable people agree that as a famous multi-millionaire, McGregor should be capable of just smiling and walking away when people sneer him.

Anyway, the incident that went down last April is still under investigation and went viral again because the CCTV footage was released. There has been an especially passionate response in McGregor’s native Ireland where the incident took place. People there are sick of him being the most famous Irish person on the planet are dismayed that he’s the first thing other countries think of when they are asked about Ireland.

Now an Irish bar in Florida – run by a fellow Dubliner – has reacted in the strongest possible way. They’ve poured 12 bottles of McGregor’s Proper Twelve whiskey down the toilet. Could there be a more Irish insult? 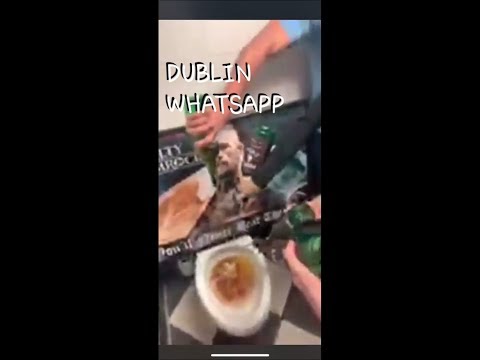 Sean Rice from the Salty Shamrock bar in Apollo Beach, Florida had a very salty response to McGregor’s latest misdemeanour. Rice decided that the best thing to do would be to flush his remaining stock of Proper Twelve down the toilet and never serve it to customers again. He wrote on Facebook:

“Due to the recent cowardly and appalling behavior of the so-called Irish professional fighter Conor McGregor, the Salty Shamrock Irish Pub will no longer carry his product nor associate its business with his name. We will discard his whiskey in a fashion thats only fitting to his behavior. I challenge every Irish bar owner to do the same! He is not a true representative of the Irish people.”

You’ve got to give credit to Rice because as well as taking the moral high ground on behalf of his nation, he’s also managed to let loose with a bit of genius marketing.

In the footage, Rice and a number of employees get rid of a Proper Twelve poster, and pour away the bottles, before throwing the empty glass into a dumpster. In fairness, the liquor was probably improved by being mixed with toilet water. It’s really not great stuff – contrary to that weird trend on Twitter where people look for McGregor to retweet them by @ing him with a caption how it’s the best thing in the world since the Baby Jesus took his first p*ss.

“Alright guys, get that in the toilet, because that’s where his whiskey belongs right now,” Rice says. “Get in here. Proper 12, to hell with it. It will never be sold in this bar.”

Last week the Irish police (Garda Siochana) confirmed that the incident was being investigated and that a file had been sent to the Department of Public Prosecution. While these things take time, the footage was pretty damning. McGregor can definitely except another payout coming his way.

If he wants to hit people that much, why doesn’t he just get back in the cage?