A lot of talk has been going on and on lately about a potential cross-sport superfight between two-division UFC champion “The Notorious” Conor McGregor and boxing legend Floyd “Money” Mayweather.

Although boxing is an integral component of mixed martial arts, they are two completely different sports.

In boxing, there is no fear of a takedown, no fear of getting hit with elbows and knees. It’s all about trading punches while using slick footwork and head movement to evade attacks. In MMA, fights are shorter because there are more ways to end a contest.

While there have been pro-boxers who have dabbled in MMA in the past, there are very few MMA fighters who have tried their hand in boxing.

If McGregor and Mayweather indeed make the impossible happen, they will have put together a blockbuster superfight the likes the world has never seen. McGregor is considered in the top three pound-for-pound best UFC fighters today, if not the best. And Mayweather is hands down the best in the sport of boxing.

Mayweather and McGregor Might Meet in the Boxing Ring

Pitting them against each other would bring together both the boxing and MMA fan bases which would conceivably shatter any financial record pertaining to combat sports. Everyone would want to watch the two go at it.

The allure of pitting different forms of fighting against each other has always made its mark in history. While McGregor and Mayweather are elites in their respective sports, there are other fighters who have tried to blur the lines.

If you are curious as to how McGregor would look in a boxing match, let’s take a look at other UFC fighters who have dabbled in the sweet science and see how they looked.

“The Phenom” is one of the most feared and relentless finishers in the Octagon. At a young age, he was already poised to rule his division and many fans and observers believed he would become a world champion.

While his UFC career didn’t exactly pan out the way fans had hoped, there was a time when Belfort stepped inside the ring to try his hand at boxing.

In 2006, Belfort made his boxing debut, competing in his one and only professional boxing match to date.

To be fair, Belfort looked pretty good. His punches were crisp and powerful, and he was very accurate. His opponent was a little flat footed however, and never fought again after getting knocked out. 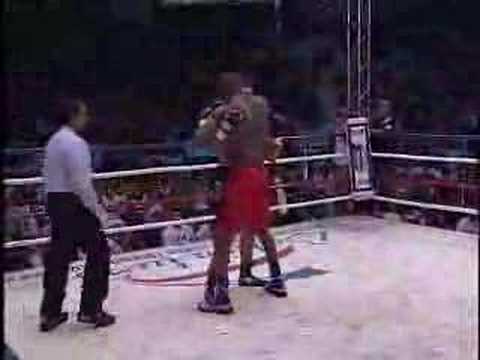 Continue on to the Next Page…

Darren - Nov 28, 2018 0
In an Extraordinary Moment of Generosity, British Boxer Tyson Fury Gave a Homeless Man His Shoes and Walked Down Hollywood Boulevard Barefoot... Over the last...