It seems the biggest news coming from Mayweather vs. McGregor so far involves Paulie Malignaggi…

Although Conor McGregor is booked to fight Floyd Mayweather on August 26, Paulie Malignaggi has been a big headline this month. Before the world tour started, Malignaggi vowed to ‘knock the beard off’ McGregor.

Accepting his challenge, McGregor called on Paulie to join his camp for Mayweather. Then began a sequence of events that would lead to sparring footage showing McGregor scoring a knockdown on Malignaggi.

Although not in fight shape, many fans expected Malignaggi to get the better of the sparring as a former two-time champion.

Denying the footage as legitimate, Paulie claimed there was a trip and push involved. Dana White and Paulie went at it on social media for a while, and literally everyone interested in combat sports made the clip go viral.

Does McGregor have the boxing skill to put a former champ to shame like this? It was 22 seconds of footage from 12 rounds, but the UFC has vowed to release the entire brawl after MayMac is done.

Commentator Joe Rogan gave us his take on the footage during his most recent podcast: 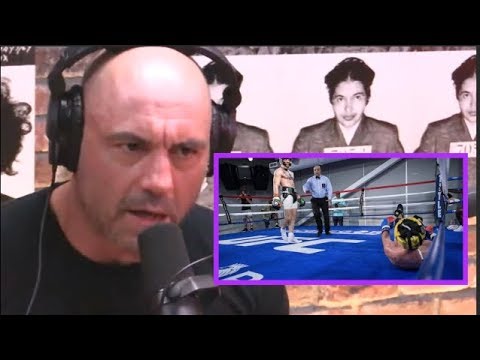 “He never gets hit. In a career that spans 20 years and 49 fights, he’s maybe been his seven or eight times.”

“How many hundreds of thousands more views is that video worth? It was probably going to sell a ton of pay-per-views, but now it will sell even more. (Watching the sparring) He’s saying there was a trip or push, but I don’t see it. He’s hitting him hard, he’s beating the sh*t out of him.”

“I don’t care what anyone says, if (Conor) can land those punches on Paulie at any time in life, he can box. Paulie messed up, he shouldn’t have done that. I also think if McGregor is in fight shape, and they are asking Paulie to fight 12 rounds, it was designed for Conor to f*ck Paulie up.”

“Some people say that he came back before and was better, but he’s 40, that’s another x factor. Why is he coming back? Is it for attention or for money, or does he want to fight? When the sparring with Paulie came out, people were like ‘oh sh*t, he can box!’ I’ve seen him box, and he can move and he has some props, but does he move like the greatest of all-time?”

“He just got off the plane from covering the Mikey Garcia fight, he was fresh off the plane, and they made him do 12 rounds. Conor said during the world tour that he was going to bring him in and f*ck him up. (Paulie) thought they would spar and be boys, but Conor was there to prove a point.”

“Paulie was saying the knockdown was dirty, and that holding behind the head is, and those rabbit punches, but Floyd is going to do that.”

Darren - Aug 16, 2019 0
Conor Mcgregor is Under Investigation After CCTV Footage Appears to Show Him Punching an Elderly Gentleman in a Bar in Dublin... At some point, Conor...

Muhammad Ali Dies Aged 74, Here’s Our Tribute To The Boxing...

Report: UFC Demanding Half of McGregor Purse in Mayweather Bout