Khabib Nurmagamedov has the entire world on his doorstep right now. A whole new window of opportunity has opened up for him after he crushed Conor McGregor at UFC 229, totally dominating the Irishman, and winning by submission in the fourth round.

Since then he’s been linked consistently to three opponents: Tony Ferguson (Dana White’s first choice), Georges St. Pierre, and the mega boxing clash with Floyd Mayweather. Khabib clearly wants to take a leaf out of Conor McGregor’s book and make some big money by crossing codes and fight in a ring instead of an octagon.

While it is unlikely that this will happen – and fans are incredibly unenthusiastic about the prospect of such a fight – Khabib wants that massive payday. At the end of the day, who can blame him for that?

Khabib believes that a fight against the unbeaten, 50-0 Mayweather is the most ‘interesting’ option available to him. Obviously, he’s entranced by Conor McGregor’s journey and the quick $100 million that the Irishman earned by fighting the man nicknamed ‘Money’. He told Russian media on Monday:

Would it really be that interesting though? An MMA fighter is not going to beat a boxer unless it’s an MMA fight. It’s that simple.

It is highly unlikely that Khabib is ever going to get that shot against Mayweather. For a start, the American boxer is coming up fast on 42-years-old. There is the possibility that they could do an exhibition match like Mayweather is doing with RIZIN’s Tenshin Nasukawa on New Year’s Eve.

However, a diluted version of Khabib boxing against Floyd Mayweather is not something anybody really wants to see. Sure Khabib can throw a good punch. He unexpectedly dropped Conor McGregor in their fight, with a disguised heavy right hand. His boxing skills are specially tailored to complement his wrestling game so that he can take the fight to the floor. He is not a conventional boxer, and would quickly get found out against an elite level fighter. 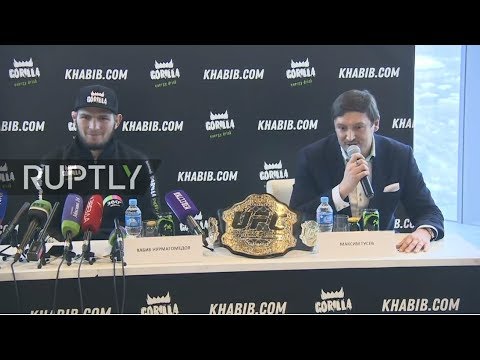 Instead, it seems likely that Khabib’s next fight will be in MMA, with Tony Ferguson his most likely next opponent. El Cucuy deserves that fight, and UFC President Dana White agrees. This bout has been booked four times previously, with both men getting injured twice. It seems to be cursed, but maybe it’s just a case of fifth time lucky.

Unless of course, Khabib can pull Georges St. Pierre out of bed and back into the octagon. The Dagestani has made no secret of the fact that it would be a dream to take on the Canadian legend. This is probably the biggest possible fight the UFC can make right now in terms of name value and legacy.

WATCH: Kickboxer Knocks Out Opponent… And the Referee

Ronda Rousey’s Mom Goes Off Again & Coach Edmond Is Not...

Knockout of The Century in Kickboxing Match

Seven Fighters With The Most Drug Test Failures

Darren Till Explains Why He is Better Than Conor McGregor

6 Things to Look for in a Plumber